A Historic Day No. 2: XRP Overtakes ETH by Market Cap

After skyrocketing by more than 111% this week Ripple’s XRP overtook Ethereum’s Ether and became the second largest cryptocurrency by market capitalization this Friday. Well, for less than a few hours. 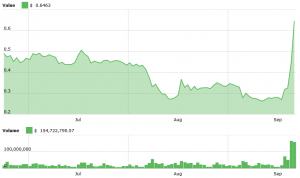 Hovever, XRP was ahead of ETH by a relatively slight margin. The market capitalization of Ripple’s token was higher by 0.3%, or almost USD 82 million. 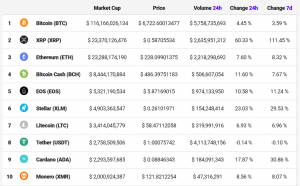 For how long XRP will sit next to Bitcoin this time, remains to be seen. In either case, Bitcoin dominance rate dropped to less than 52%, compared to 56% a few days ago, while the share of XRP in total market capitalization increased to 11.28%. 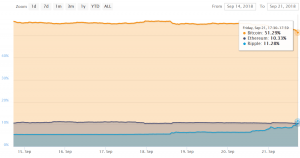 As reported, this week, Sagar Sarbhai, head of regulatory relations of APAC and the Middle East at Ripple, told CNBC that he’s “confident” that their product xRapid, a source of on demand liquidity, will go into commercial application soon. According to Sarbhai, more than 120 banks are currently partnered with Ripple, using its blockchain-based product xCurrent, a banking payment solution. Also, on Wednesday the company announced about a new partnership with US-based PNC Bank , the 9th biggest bank in the US by total assets.

Other explanations largely focus on the recently depressed XRP price, and that the asset has moved into “oversold” territory on several indicators used by technical analysts in the crypto market.

Fundamentally, however, one of Ripple’s main concerns has been that most banks that the company works with chooses to employ solutions that do not involve the use of the XRP token, fuelling speculations that XRP does not offer any real utility for users. In the past, Ripple’s CEO Brad Garlinghouse has defended himself against such speculation by attacking bitcoin, while claiming that XRP is “the best digital asset for settlement.”

Where are all those XRP bashers?