Owning a masternode is the third most popular way of being a part of the world of cryptocurrency, right after plain old “HODLing” and trading on an open market. In essence, it represents a form of passively holding cryptocurrency by running a wallet that is connected to its related blockchain network 24/7. Running a masternode carries significant responsibility and at the same time comes with some interesting perks requirements. Among those requirements we can include Virtual Private Servers (VPS) and we’ll be taking a closer look at those down below. But first, let us dissect what masternodes actually are.

What is a masternode?

Here is a more detailed guide on masternodes.

As you can deduce from the name, a masternode is an advanced network node that is placed above regular nodes in the on-chain hierarchy. It contains the full copy of a project’s blockchain and is constantly in sync with the blockchain. And while both the regular and masternodes represent critical elements of one blockchain’s infrastructure, there are some differences between the two in terms of network responsibility and in terms of rewards they receive for the work they do.

A normal node acts mainly as support for network masternodes, focusing on receiving, storing and broadcasting transaction data. A masternode is the one responsible for actually “verifying” transactions by creating blocks out of transaction data relayed by normal nodes and adding these blocks to the blockchain.

Finally masternodes can sometimes come with other duties, including on-chain voting, execution of blockchain upgrades, management of blockchain treasuries, and enforcement of blockchain rules. Their increased importance to the network is usually rewarded by giving the masternode tokens or coins with each new block that is added to the blockchain and by paying them interest. That being said, running a masternode isn’t an easy task and its owner will need to invest a significant amount of funds and time into the ordeal.

Requirements to run a masternode

First of all, not everyone can enjoy the privilege of hosting a masternode. As this is an extremely responsible position to hold, it is very important that masternode operator is someone who has a genuine interest in the blockchain staying safe and prosperous. As such, blockchains require that each masternode operator owns a very large sum of cryptocurrency (usually the cryptocurrency he’s applying to manage the blockchain of).

This “bag” serves as insurance that the node will remain honest and dedicated “to the cause”; if it starts behaving malicious, operator’s own holdings will suffer as well. Different blockchains will naturally demand different amounts of cryptocurrency to be held by their masternodes. For example Dash requires 1,000 coins, SysCoin requires 100,000 coins and PIVX requires 10,000 coins. This bag can also play a role in blockchain governance and voting, as masternodes that have a bigger “stake” of crypto in their wallet get proportionately bigger vote in on-chain matters (masternodes and proof-of-stake are two different systems but that’s a story for a different time).

After securing your cryptocurrency bag, you’ll need to consider what kind of hardware you want to be running your masternode on. The hardware required to run a masternode isn’t that outlandish as 2 core, 2 GB of RAM devices will do just fine. You’ll probably spend most of your hardware budget on storage space and a quality internet connection. Finally, to ensure that your masternode runs in a stable, efficient manner at all times, it is recommended that you set up a Virtual Private Server.

A VPS is a Virtual Private Server, or virtual machine, provided by web hosting companies all over the Internet. It is a server running within a server; a VPS is hosted by a “normal” physical server. One physical server can host multiple virtual servers which can run and be maintained independently from one another. A VPS runs on an operating system which has root access enabled, allowing the node operator to fine tune the device to his and his blockchain of choice’s needs.

All of the above means that running your masternode with the help of a Virtual Private Server is the way to go. Each masternode will require a different VPS Let’s take a look at a couple of the best ones currently available on the market. 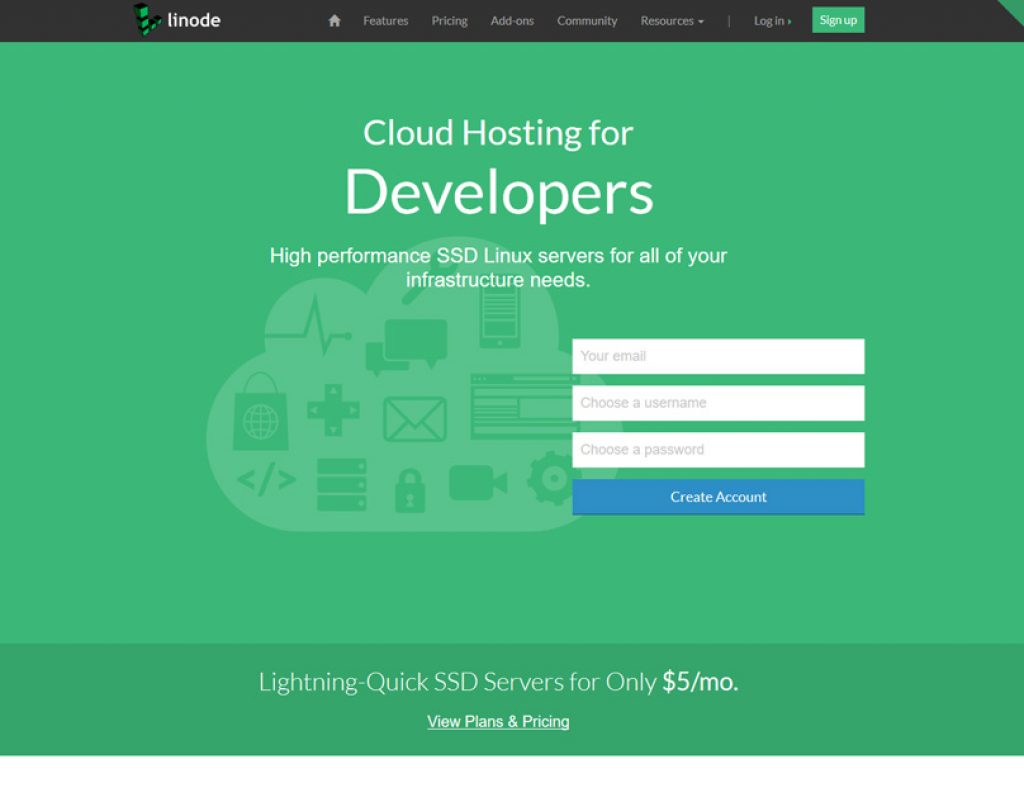 report this adLinode is a VPS provider offering high performance SSD-hosted Linux servers for all of their customers’ infrastructure needs. Fast hardware combined with scalable environments aims to bring the best possible user experience. The network is backed by a 40 Gbps throughput speeds and Intel E5 processors and is spread across 9 different service providers located in 3 world regions. The network offers some strong features:

While their best package offers up to 192 GB of RAM, 32 core processors, 3840 GB SSDs, 20 TB of transfer limit and speeds of 40Gbps/12 thousand Mbps, a masternode operator likely won’t need this extreme level of performance. Packages with 1 or 2 cores will suffice in most cases and won’t set the operator back by more than $20 per month. Overall, Linode is a service perhaps more geared towards users that require stronger memory plans; still, it is perfectly capable of supplementing the needs of an average masternode. 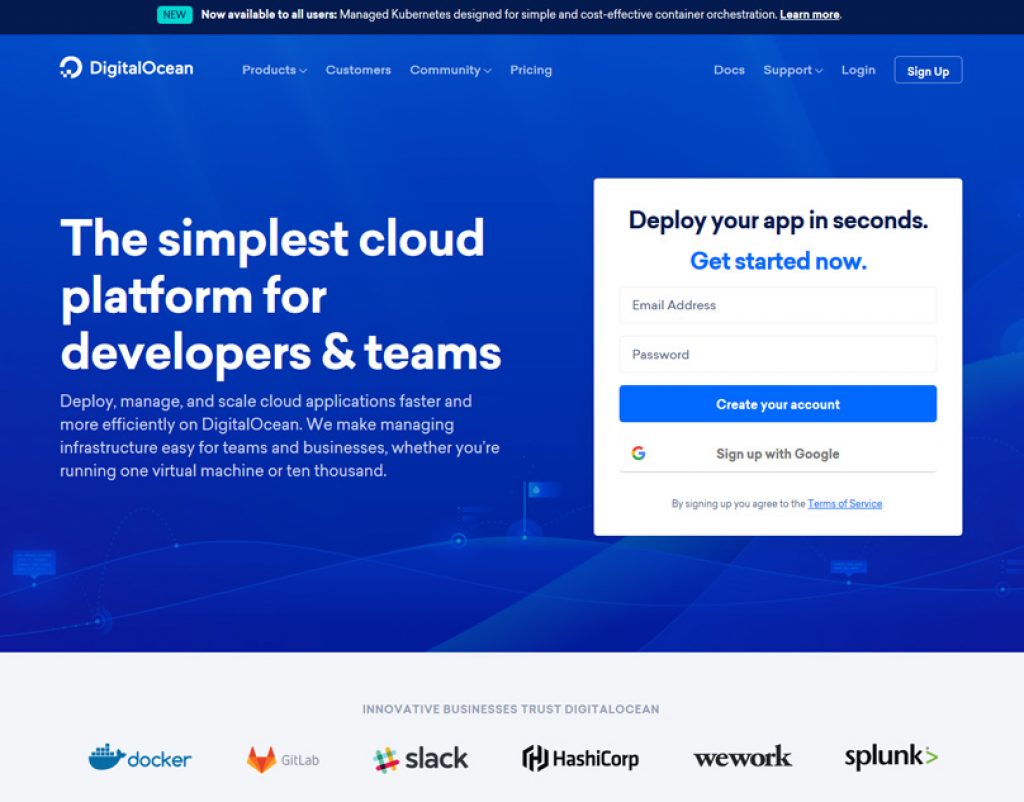 DigitalOcean is a platform currently serving over 100 thousand developer teams worldwide. It lets you run balanced virtual machines with a healthy amount of memory tuned to host and scale applications like blogs, web apps, testing and staging environments, in-memory caching, and databases. All plans this VPS provider offers come with a whole host of developer-friendly features:

Their plans are called “Droplets” and are quite affordable. As the best possible service available on the platform, DigitalOcean offers a 192 GB/32 core CPU/3840 GB storage/12 TB transfer limit behemoth. Perhaps more importantly for masternode operators, DigitalOcean has a rather wide variety of 1 and 2 CPU packages that are perfectly suited for their needs. 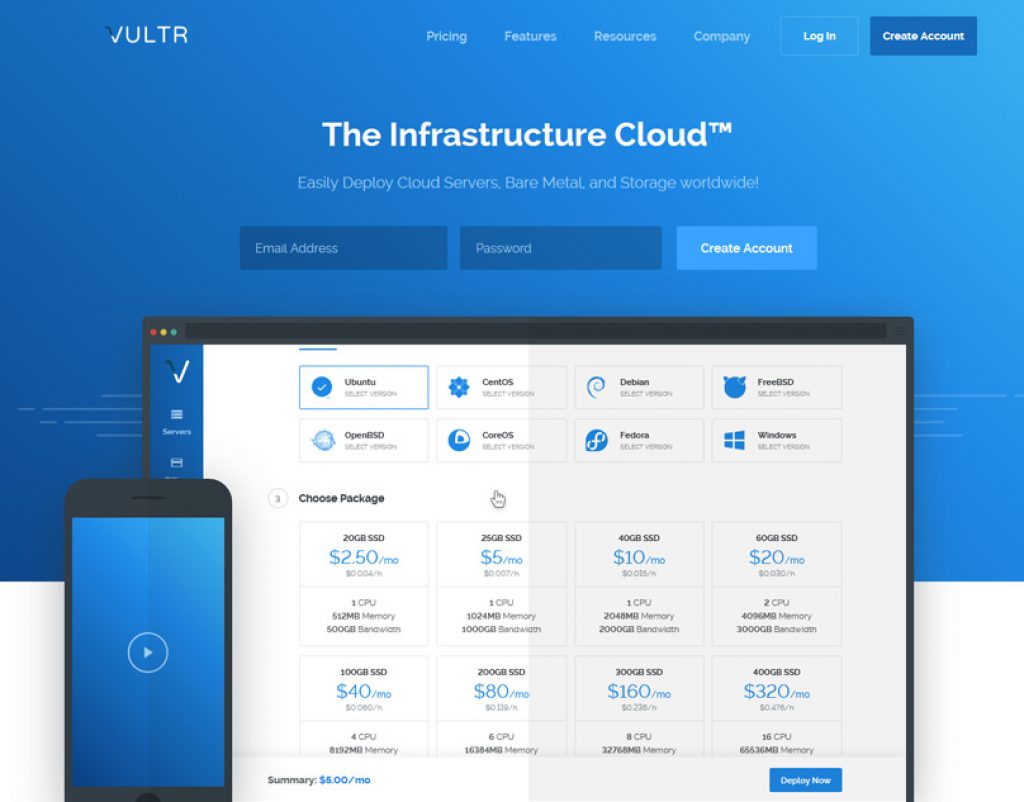 Vultr has been around since 2014 and have focused on providing a quality cloud platform for various infrastructure deployments. Located in 16 datacenters around the world, it offers a high quality, very reliable performance in each of those cities. With a team of 50 engineers behind the project, 21 million instances deployed, and over 100 thousand customers on board, Vultr is one of the most popular solutions on our list. Some of its features include:

Base plan (which will set you back $2.50 per month) is quite weak, as it offers you 20 GB SSD storage, one CPU core, 512 MB of RAM and 0.50 TB of IPv6 connectivity. There are also several other stronger 1 and 2 CPU plans that won’t cost you more than $20 per month and will be perfect to satisfy masternode operator needs. The final plan isn’t as dominant as the ones we saw with other providers, coming with 400 GB of storage, 16 CPU cores, 64 gigs of RAM and 10 TB of throughput. Another feature that crypto enthusiasts might appreciate is that Vultr accepts payments in Bitcoin.

Searching for a VPS that can be paid in cryptocurrencies like Bitcoin, Ether or Dash? Then Switzerland based hosting service is your choice. They have solid Linux VPS packages at very affordable prices:

This company is a old player on the market meaning a lot of experience and professionalism. Their approach is to offer the highest performance and most stable systems at very competitive prices.

They also offer windows servers from $10 / month. But for MasterNodes you better go for Linux anyways.
Interserver.net has 3 data centers, all in the US.

VPSDime is another Linux focused VPS that has the option of Windows support.

VIRMACH has 11 datacenters and a range of VPS plans to suit most budgets. 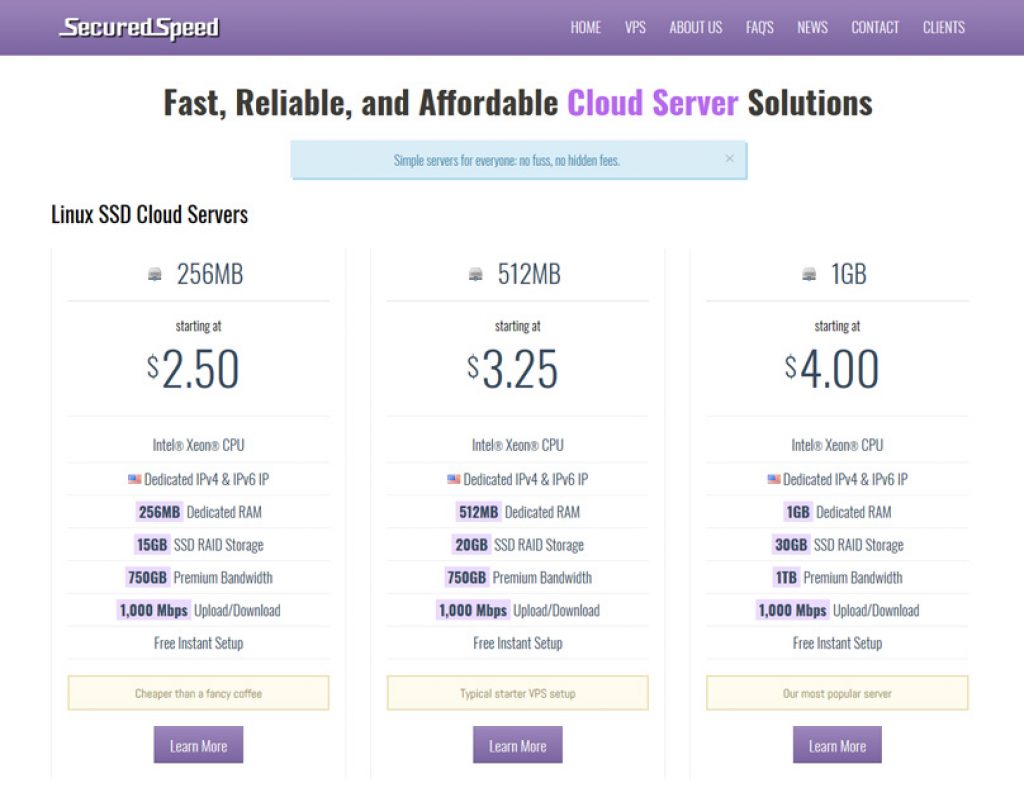 Secured Speed prides itself on affordable pricing and being fast and reliable.

The services named above aren’t anywhere near the end-all, be-all of masternode hosting. Projects like Secured Speed, OVH, Kimsufi, Virmach, VPS Server, VPSDime and others offer similar features at similar prices. You as a masternode operator will look to deploy your infrastructure with a VPS provider that is relatively close to you and offers you the best deal financially (sometimes your selection might be limited by certain masternode requirements).

All in all, if you decide to start running your own masternode, you’ll have a lot to think about (namely determining the masternode’s ROI and if the whole endeavor will pay off). Websites like masternodes.online and masternodes.pro offer you a collection of required information to determine if a certain masternode project is worth it. Finally, choosing one of the VPS service providers listed in this article will be an important step along the way of becoming a full-time masternode owner and operator.

I use Vultr a lot for many different projects, they are certainly the fastest VM’s at the price comparison of almost all other vendors I have tried.

I still use Azure for ML and AI though, but probably not something you need for a Master Node.