One of Bitmain’s biggest rivals is ready to give the bitcoin mining giant a run for its money as both firms prepare to go public in Hong Kong.

The China-based Ebang Communication, one of the world’s largest manufacturers of application-specific integrated circuit (ASIC) chips for bitcoin miners, has unveiled the next generation of its flagship product line, complete with an upgraded chip that makes significant strides in energy efficiency.

Ebang made the announcement at the World Digital Mining Summit in Georgia, stating that the Ebit Miner E11, E11+, and E11++ will be available for preorder soon.

The E11 series features a 10nm chip, the same size featured in its E10 product line. However, according to a product flyer circulated on Twitter by Blockstream CSO Samson Mow, the E11 series is capable of achieving phenomenal performance for a 10nm chip. Per the flyer, the Ebit E11++ can achieve a power consumption as low as 45J/TH at 44TH/s while even the lower-end E11 bases model offers a hashrate of 30TH/s at 65J/TH.

#Ebang has just announced their next gen miners, the E11 series with 10nm chips up to efficiencies of 45J/TH. That’s for the entire miner at the wall, not the chip. Ebang has maxed out gains for the 10nm process node, and it far exceeds Bitmain’s 7nm stats. #WDMS #miningconf 🍿 https://t.co/jzXx3AYZWI 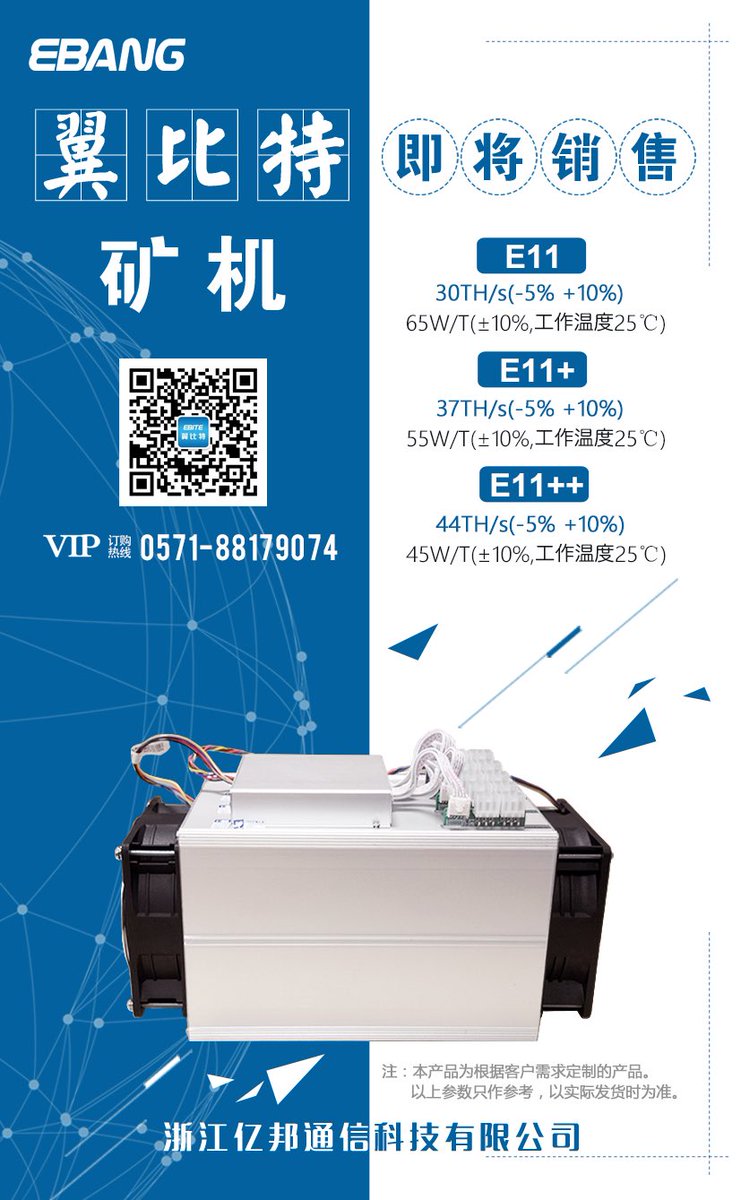 Bitmain, also based out of China, claims to possess a 70 percent share of the cryptocurrency ASIC market. Shortly before Ebang unveiled its E11 series, Bitmain CEO Jihan Wu announced that the firm had developed a 7nm chip for its yet-to-be-released next mining rig generation.

Wu said that Bitmain’s 7nm chip can achieve a max power efficiency of 41J/TH, which does not include the rest of the mining rig. Consequently, it’s unlikely that Bitmain’s next generation of bitcoin mining ASICs will have comparable performance to the E11 series.

As CCN reported, market research firm Sanford C. Bernstein & Co. recently published a report alleging that Bitmain, which is said to be worth at least $15 billion, is losing its competitive edge in ASIC development.

Of course, price points matter, and it remains to be seen whether Bitmain — which is almost certainly holding much more capital than Ebang — can price its miners low enough to be profitable while also maintaining its dominant market share.

Both firms, along with fellow China-based mining firm Canaan Creative, plan to hold initial public offerings (IPOs) on the Stock Exchange of Hong Kong (HKEX) within the near future. Ebang and Canaan are said to be targeting raises as large as $1 billion while recent reports have suggested that Bitmain will likely raise $3 billion.