My article on cryptocurrency and rare digital art was recently published by Bitcrystals and I’d like to share it here to see what those in The Bitcoin Pub think about these cool new developments.

Chiappetta_BoO_02.png814×818 493 KB
The Rise of Rare Digital Art: Blockchain Becoming Best Friend to Art World
In appreciating early-adopter concepts like blockchain or rare digital art, it helps to back into it slowly with the story of how we got here. It all has to do with ownership. The ability to own things can often be a defining marker in people’s lives. Whether it be owning a house or a rare back issue of Spider-Man kept in an acid-free mylar bag, people get a certain gratification out of owning things and considering the responsibilities and privileges of such ownership. Buying, collecting, and selling various things at our own discretion in a free market can be fun, educational, and sometimes even rewarding.

As a long-time cartoonist on Silly Daddy Comics, I remember the early days of the Zine Scene (think homemade artistic magazines) in the 1980s. I would photocopy my art and comics in book format–two images to a page. Then I’d hand-staple the pages in the center, fold them, and convince local shops to give me a bit of shelf space so customers can buy my zines. As a little guy using this model, I could bypass the book and art industry gatekeepers and go directly to the customers through these stores as well as face-to-face comic book convention appearances. At these conventions I’d also sell original art too. What a wonderful world.

These zines of mine were basically limited edition prints, but in mini-comic book format. Once such creations ran out, no more would be made. The collectors could hold them, or resell them to other collectors, partly because of the item’s artistic merit, but also because of its rarity. In fact, the 300 random people who still have my zine called Silly Daddy #1 (from 1992) are sitting on a pretty good investment. Those few original copies of a comics property that has lasted over 25 years would likely mean a lot to art collectors in the know.

And Then There Was Digital
With the advent of computers and fast Internet, the concept of rarity and collectible content had, for too long a time, been largely kicked to the curb. There’s no limit to how many eBooks that can be issued. Songs and videos can be copied as needed. If a viewer finds an artistic image of interest, again, just copy and paste it… as many times as seen fit. Therefore for artist such as myself, nothing prepared me for the transition to a digital world, and it took a while to learn how to navigate in this paradigm shift. And giving up on the rarity of art was one of those concessions–for a time.

Sure, artists could still issue limited edition physical prints of their work, or one of a kind physical paintings, and many still do. But more and more, things keep going digital. Plus, more people have become more mobile, wanting to travel light, with less stuff to pack and move, yet still retaining instant access to all their stuff somehow. Therefore a new opportunity was crying to be born: the need to create digital scarcity and ownership of digital art items. And finally, we have the technology.

And Then There Was Bitcoin
Regardless of the polarizing opinions surrounding Bitcoin and other cryptocurrencies, the underlying technology that has made these particular digital items scarce (and therefore valuable) is something called a blockchain. For those who don’t know, Bitcoin is a virtual currency that has been programmed to have a limited supply. In fact, there are only 21 million Bitcoins that will ever be issued. This digital scarcity is one of the many things that has led to Bitcoin’s meteoric rise.

Compare that to the US Dollar. It might be a bit scarce in some of our bank accounts, but the US Dollar is not scarce at all, and it is not currently designed to be scarce. When the government needs more, it just prints more money. Plus, every time a bank issues a new mortgage, it simply creates the money as a debt out of thin air.

Rare Digital Art Right Now
What do these things have to do with rare digital art? Much, actually. Just as the blockchain has empowered Bitcoin to be programmed with a fixed, limited supply, and unalterable records of ownership, so the same goes for rare digital art. Artwork, including some of the comics that I have recently made, can now be issued on the blockchain in limited supplies. This means collectors can buy, hold, or sell these artworks in digital art wallets. They can even transfer ownership to others and give them away as gifts.

Mind you, the rare digital art that I have described here is not merely an idea that might happen some time in the future. It is happening right now. In the past month, I have sold over 50 comic strip trading cards in the form of rare digital art. This has been made possible through a remarkable platform called Book of Orbs, built by EverdreamSoft. That company also makes video games, and the same cryptocurrency (called BitCrystals) that is connected to its game play can also be used to buy the rare digital art. How crazy and cool is that?

The way this system works, in a nutshell, mimics what collectors and artists would want in the physical world: easy access to the market of collectors and artists, the ability to issue art in verifiable limited quantities, and an economy built right into the platform. Plus, something that comes with rare digital art that you can’t easily get in the brick and mortar world, is that the market is always open, 24/7. Gratefully, all these elements are exactly what EverdreamSoft has infused into their Book of Orbs app, which comes in a desktop as well as a mobile smartphone app version.

There are a limited few other platforms out there that are up and running now as markets for rare digital art, but here I have only focused on what I am most familiar with, and that is the Book of Orbs, which is part of the BitCrystals ecosystem. I think it’s great for collectors and artists who are a bit tech savvy, not afraid of using cryptocurrency, and hungry for innovation. For those looking, you’ll find a whole new community around rare digital art, in Book of Orbs and beyond. I have observed this movement to grow into a vibrant network of trailblazers. If you’d like to blaze that trail too, join the many collectors, artists, entrepreneurs, and investors who are bringing new value, innovation, and excitement into the world of art and comics. 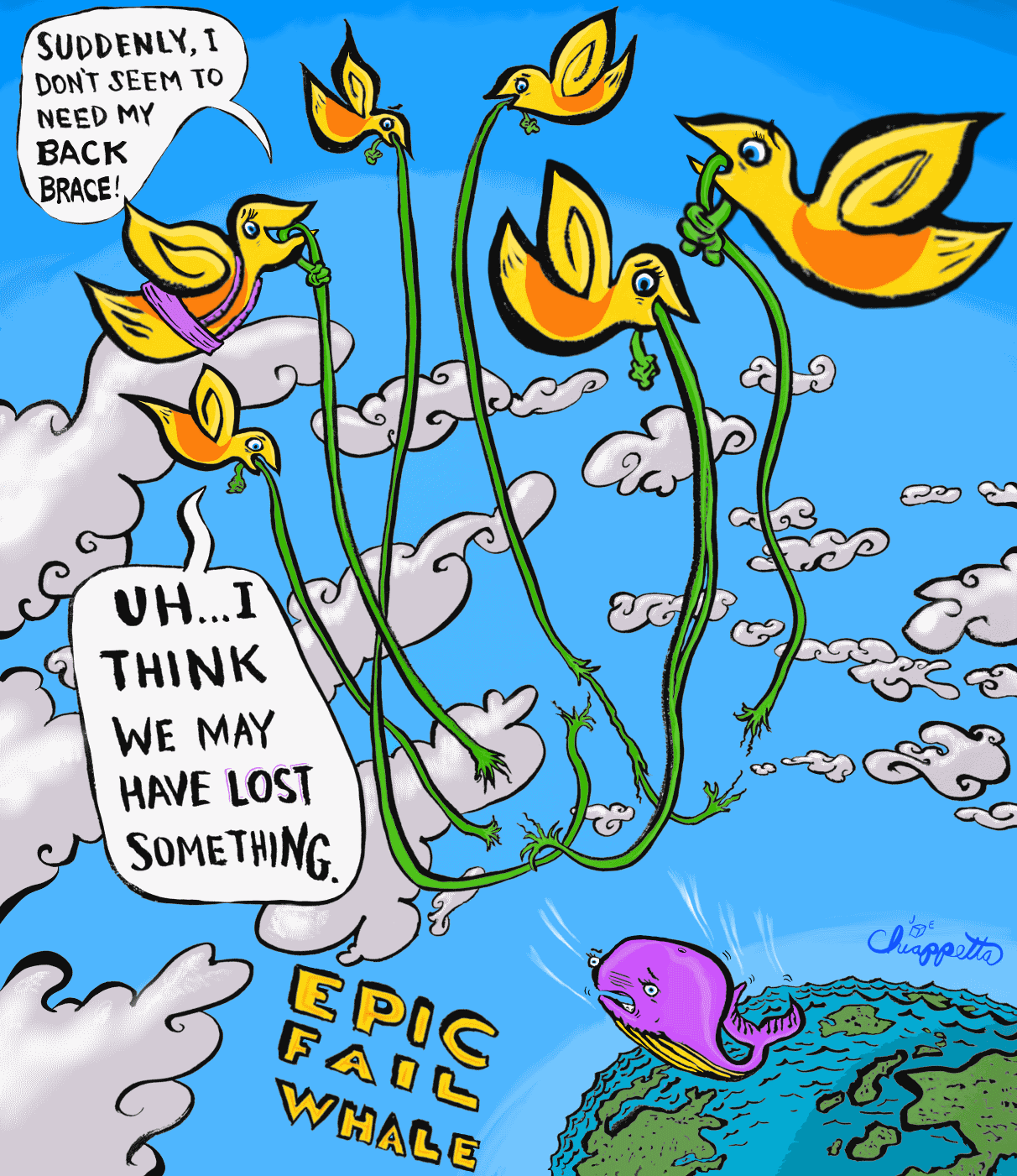 Epic Fail Whale takes allegorical comics to new heights (and lows)! This fun comic is a tribute to my friend… by joechiappetta