While cryptocurrencies like Bitcoin have existed for over a decade now and have inspired highly polarizing views regarding their disruptive capabilities, Central Bank Digital Currencies (CBDC) are now carrying forward the tradition. CBDCs have become...

While cryptocurrencies like Bitcoin have existed for over a decade now and have inspired highly polarizing views regarding their disruptive capabilities, Central Bank Digital Currencies (CBDC) are now carrying forward the tradition. CBDCs have become a new and ‘safe’ way for governments to get into the crypto-ecosystem, while maintaining a firm grip in terms of regulations.

On the latest episode of the On the Brink podcast, Larry White, Professor at George Mason University and Senior Fellow at the Cato Institute’s Center for Monetary and Financial Alternatives, spoke about the challenges pertaining to the implementation of CBDCs and its impact on the financial landscape. Highlighting the intrinsic model of the CBDC that most countries like China and the U.S are planning to launch, he said,

“There are some people who talk about doing it on a distributed ledger, but that’s a minority. The leading model is to allow ordinary people and businesses to have accounts on the books of the Federal Reserve system, which is something that only commercial banks have now.”

According to him, the benefits of a distributed blockchain-based ledger which continues to be a radical feature ever since Bitcoin was introduced to the world will not find its way to CBDCs as most planned models are far from decentralized.

He highlighted the changing role of the Federal Reserve once CBDCs become a reality in the U.S. He added,

“It means the Federal Reserve, which is only operating a wholesale clearing house now, is going to get into retail banking, retail payment services in a very big way.”

Along with these changes, there are also serious privacy implications with regard to CBDCs. For cryptocurrencies and the crypto-community, the self-sovereignty of cryptos such as Bitcoin is of crucial importance. The decentralized nature of the cryptocurrency makes it not just a robust system, but also prevents any form of censorship on the blockchain. However, White pointed out,

“Once people’s accounts are being held by an agency of the Federal government, there’ll be even less protection of their privacy than there is now, which is not very much, admittedly.”

“It’s not that the Federal Reserve officials are themselves all that interested in invading people’s privacy. And in fact, the chairman, Jerome Powell has said he doesn’t want access to everybody’s bank account information, but still, they would be pressured by The Department of Justice, the FBI, ICE, DEA, and so on.” 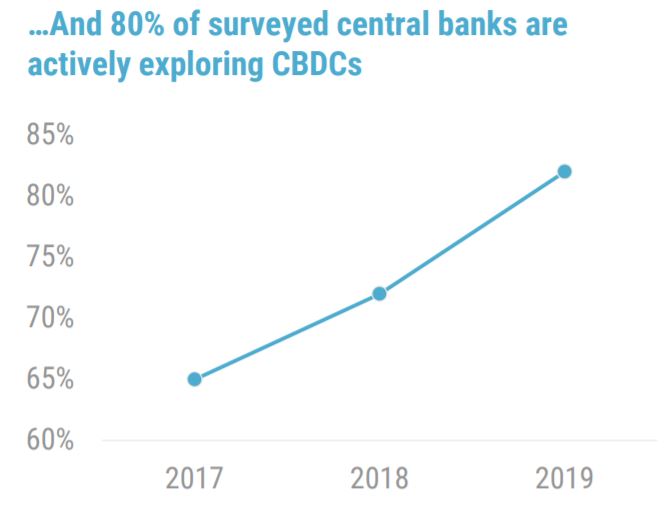 A recent Blockchain report by CB Insights had highlighted how 80% of surveyed central banks are actively exploring developing and deploying digital currencies.

In fact, BitMEX in its latest report, had also highlighted some of the systemic changes that are likely to happen once CBDCs gain their footing. The report said,

“Allowing the general public to make electronic deposits at the central bank provides an extremely powerful way for people to exit the commercial banking system, which is likely to heavily constrain the banks’ ability to create credit.”