Billionaire bitcoin bull, Tim Draper says, “The DEFI world is almost as technologically advanced as the dollar, and when it is, there will be no one who will want to accept politically manipulable currency like dollars anymore.”

The decentralized finance (DeFi) movement is reimagining the way we do finance. From savings, peer-to-peer (P2P) loans, derivatives to insurance. Within just a blink of an eye, DeFi has become a global alternative to traditional finance.

Billionaire bitcoin bull, Tim Draper says, “When politicians are printing trillions of dollars willy nilly, People don’t trust the value and it simply accelerates the migration away from fiat political currency like dollars or pesos and toward undilutable decentralized currency you can trust like bitcoin.”

Draper further goes on to say that, “The DEFI world is almost as technologically advanced as the dollar, and when it is, there will be no one who will want to accept politically manipulable currency like dollars anymore.” With the Fed’s debt hitting an all-time high of $25 trillion, Draper indeed might be correct.

A challenge to legacy finance

There are rumors that bond yields and interest rates could go negative within the next year. That said, the search for yield may lay outside the scope of the legacy financial system. Could DeFi be an alternative solution to [something]?

According to Steven Becker, the President of the Maker Foundation, “DeFi has the potential to completely reinvent the world’s financial systems, merging the scale and familiarity of the traditional economy with the security, efficiency, and transparency of the public blockchain.”

Becker adds, “The next step for DeFi is making decentralized governance work at scale in order to bring ‘real world’ assets to the blockchain to foster growth and utility. A number of DeFi projects are making great progress in these areas and we anticipate seeing more wins put on the board as we move through 2020.”

Yves La Rose, the CEO of EOS Nation says, “The foundational tools for DeFi are being built at an ever-increasing pace in order to be there when the flood gates open. I expect to see a significant influx of traditional money flow into the ecosystem in the coming months as people start to realize the machine can’t go brrrrrr forever.”

La Rose believes, “The trustless, transparent, and immutable nature of blockchains combined with their capacities to be programmed to trigger functionalities based on a set of pre-defined conditions are ideal for DeFi. At the protocol level, this enhances security and reduces the cost of doing business.” 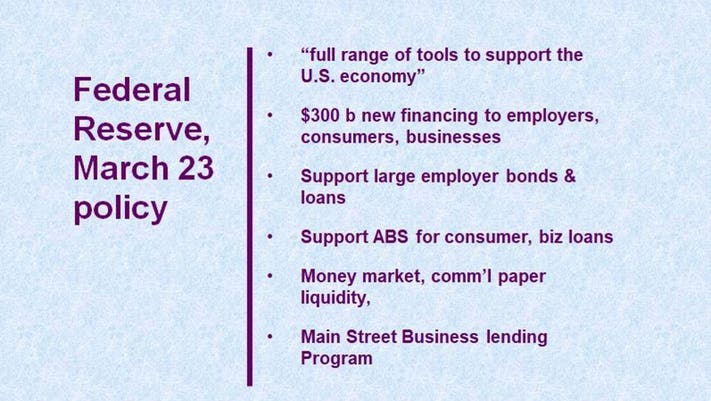 DR. BILL CONERLY BASED ON INFORMATION FROM THE FEDERAL RESERVE

In essence, DeFi emulates mainstream finance, but with a major point of difference, it is not controlled by a governing authority (I.e. Like how the Fed can print money whenever they want; choose which companies they will bailout; manipulate the stock market, etc).

Through smart contracts, DeFi provides an alternative system for people. Here’s how the DeFi shift is transpiring:

Ana Andrianova, CEO Akropolis, an on-chain protocol for savings, credit, and pensions believes that DeFi, with all its growing pains, opens us radically new possibilities due to the composability of its building blocks, inherent trustless settlement requiring no intermediation, and an incredibly short time to market (not always a positive).

Andrianova says, “We are seeing the entire financial infrastructure stack being rebuilt from the ground up, with such financial primitives as decentralized stablecoins, automatic market-makers, price-less synthetic assets, reflexive bonds, to name a few. A parallel financial ecosystem emerges with no dependency on the legacy banking system—a key feature that few appreciated until the recently unfolded crisis.”

The key to DeFi

Eric Chen, the CEO of Injective Protocol says, “ With fundamental financial instruments such as lending, staking and spot exchanges becoming common ground in the cryptocurrency world, the next big movement is derivatives and other advanced financial products on ethereum.”

In order for DeFi to flourish it needs mainstream adoption, and for a large part, that could mean millennials. As reported by Cointelegraph, just a short while ago Kraken Intelligence released a report entitled, “Inheriting USDs And Acquiring BTCs: How ‘The Great Wealth Transfer’ Will Fuel ‘The Great Bitcoin Adoption.’”

The Kraken report found that if millenials invested at least five percent of their wealth in bitcoin, then this could potentially drive the price of bitcoin to $350,000 in 2044. As a result, from a $971 billion investment, this would give millennials around $70 trillion.