French Finance Minister Bruno Le Maire announced that the country’s Parliament approved a legal framework for initial coin offerings, proposed by the Autorité des Marchés Financiers (AMF). The details of the framework have still not been made available to the public.

The announcement was made by Le Maire in a tweet,

A legal framework for ICOs has been created. The AMF will be able to issue a visa to the actors respecting criteria of protection of the savers. This legal framework will attract the innovators from around the world. 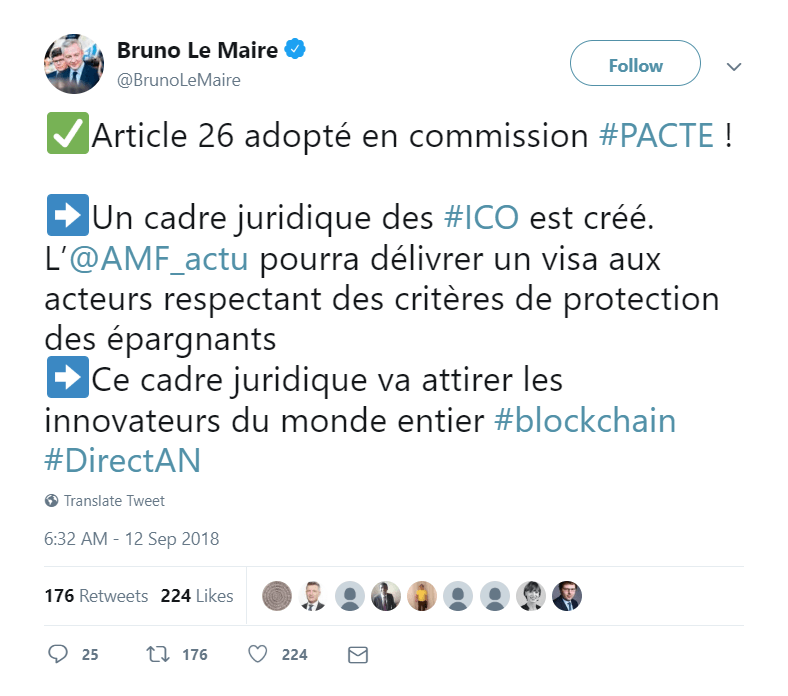 A couple of months ago, Le Maire revealed in an opinion piece published in Numerama that France was interested in becoming the first major financial center to develop an ad hoc legislative framework that would allow companies to raise funds through initial coin offerings, as long as they complied with the government’s criteria for protecting investors.

According to Le Maire,

A revolution is underway, of which bitcoin was only the precursor. The blockchain will offer new opportunities to our startups, for example with the Initial Coin Offerings that will allow them to raise funds through tokens […] This promises to create a network of confidence without intermediaries, offers increased traceability and will boost economic efficiency.

The French government has been very active in discussing and tackling cryptocurrency-related matters. In April this year, the country’s Conseil d’Etat slashed the cryptocurrency gains tax rate down to 19%, from the previous 45%, after concerned citizens appealed to the regulatory entity to change the crippling taxes being enforced since July 2014.