Roger Ver shows how not to start a debate… pretty disrespectful, outside of his… perspective.

It looks like Jimmy’s not letting him speak to me, I thought it was suppose to be a debate lol

Song opened the debate and stated several points by backing them up with great ease. The developer believes that Bitmain acts as a centralized reserve bank for Bitcoin Cash. Furthermore, the hard fork is actually a group of elites who determined the roadmap for the project and forced the upgrades on the community, stated the techie.

Regarding the central body of BCH subsidizing payments, he also said that it does so through large blocks, instead of listening to the market that opposes the idea. The Bitcoin supporter also argued that BCH is paternalistic.

He based this argument on the recent event that occurred within the BCH community wherein two parties split the community over a clash of ideas. According to Song, Bitmain’s Jihan Wu and Craig Wright are fighting for ‘control over the direction of BCH’.

The highlight of the talk was when Song spoke about the relationship between centralization, Bitcoin Cash and Bitmain. He stated:

“Bitmain is the central bank of BCH. Bitmain has tried to maintain a peg to their reserve currency, BTC, and has failed. Bitmain has failed to keep the peg at 0.15 BTC, 0.12 BTC and recently capitulated the 0.1 BTC level. This is a central bank selling its reserves to keep its peg to another currency. What’s worse, much like a central bank, they’re running out of reserves and BCH will finally float on the market instead of having the artificially inflated value that it has now.”

On all these allegations, Roger Ver did not have much to say at the beginning of his turn. He refuted all the arguments put forth by his opponent by quoting those arguments as ‘nonsense’. Here, Song took to the podium again and continued to state his points.

In one of the statements, Song said that BCH exists without a legitimate purpose. He named nearly a dozen other hard forks of Bitcoin Core, defining the unique selling point of each cryptocurrency. The hard forks included by him were Bitcore, Bitcoin Diamond, Bitcoin Gold, Super Bitcoin, Bitcoin Vote, Bitcoin File, Bitcoin World, Bitcoin Atom and many others but highlighted Bitcoin God as being his ‘personal favorite’, in the interest of sarcasm.

Over the issue of BCH centralization, Roger Ver made an attempt to rebut and turn the argument around. He responded by saying that decentralization is the reason for multiple parties fighting in the BCH ecosystem. According to him, that is what happens in a decentralized space.

Ver also added a challenge in the debate wherein he made a 10-year bet with Jimmy Song claiming a prediction that BCH will have a higher market cap than BTC over the next decade. However, Song showed no interest in the matter, given that the timeline of the claim was too long.

“it’s an affinity scam, If it’s better than bitcoin it doesn’t need to have bitcoin in the name, it can’t stand on it’s own merits so it has to market as “the real bitcoin” in order to sucker people into buying what was created out of thin air with no proof of work.”

“I wonder when Jihan decides to dump it all”

Jimmy also ran off crying when someone gave Roger a Mic

When you have an agreement and someone breaks it, would you still want to play ball with that person?

I wish I went on this cruise, this looked like a lot of fun!!!

I cant figure out what Roger Ver’s deal is but in my opinion he is toxic for crypto community. Does he really Believe Bcash is better or the real Bitcoin, Is he motivated by greed/financial gains, or is it an ego thing? Maybe a combination

Why cant they just coexist or allow free market to decide?

Everyone needs to keep in mind that we are our in our own little world here and we’re trying to expand. What does it look like to the average person peering inside?

This is stuff that general public gets to read about when we act like idiots in the crypto community. Doesn’t bode well for mainstream adoption does it? This “debate” reminded me of some of the same interactions that occur in the pub 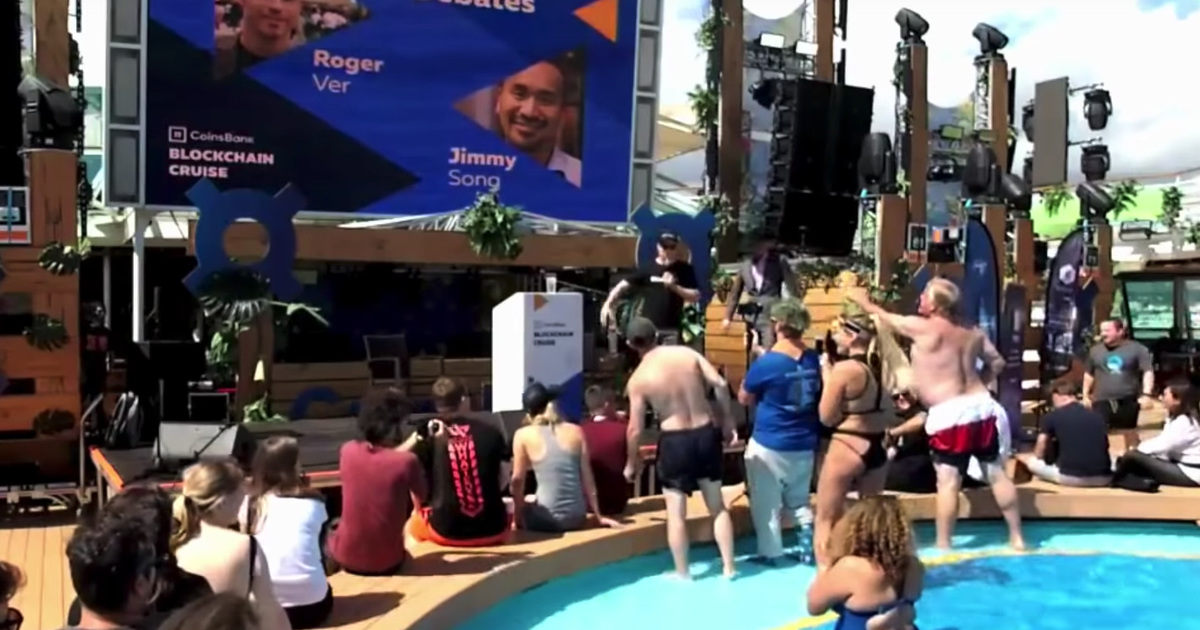 It only took 37 seconds for two bitcoin 'celebs' to start fighting on a...

The future of finance is bright.

BY JACK MORSE1 DAY AGO

The cruise ship wasn’t big enough for the both of them.

On September 10, somewhere in the Mediterranean, two well-known rivals in the cryptocurrency space stood awkwardly poolside. A crowd, sporting a mix of cryptocurrency-themed t-shirts and bikinis, lounged nearby on the ship’s upper deck. One man, sweatpants sloshing in the water, steadied a tripod. The Bitcoin versus Bitcoin Cash debate was about to begin.

It only took 37 seconds to spiral out of control.

SEE ALSO: Inside the Vegas nightclub that launched its own cryptocurrency

The CoinsBank Blockchain Cruise, chartered to take cryptocurrency die-hards from Barcelona, to Monaco, to Ibiza, and then back, was in its fourth day, and a highly billed event had managed to drag a few likely hung over attendees out from their below-deck cabins. Jimmy Song, a venture partner at Blockchain Capital LLC, was to argue the relative merits of Bitcoin (BTC). Early Bitcoin adoptee and Bitcoin Cash evangelist, Rover Ver, was to speak on behalf of Bitcoin Cash (BCH).

Bitcoin Cash was born following a 2017 Bitcoin hard fork, and despite BTC’s and BCH’s shared history, the two cryptocurrencies and their respective boosters have become the blockchain’s very own Montagues and Capulets — each disparaging the other at every conceivable opportunity, with both sides lobbing accusations of fraud and deception.

It was perhaps to be expected that the debate wouldn’t go smoothly, but just how quickly it went off the rails surprised even those in attendance.

Song, cowboy hat atop his head and microphone in hand, attempted to introduce the format of the event — a “Lincoln-Douglas style debate” — but was soon interrupted by Ver.

Couldn’t even get started.

Shouts of “no Roger” emanated from the crowd, as Ver told the audience to “calm down.”

It quickly spun out from there, with Song repeatedly telling Ver to “sit down” as Ver angled for the microphone.

“Do you want to debate me or not,” Song demanded. “OK then sit down,” he repeated as he stood behind the podium.

Bickering over whether or not Ver would get a one minute introduction before the official start of the debate continued on, with Song addressing the crowd and Ver shouting at the top of his lungs.

They heatedly yelled over each other as the crowd jeered.

Three minutes had passed, and things were not going well. And then someone handed Ver a mic.

You better believe Song wasn’t having that, and so he stormed offstage saying he was “refusing to do the debate.”

Finally with the stage all to himself, Ver attempted to speak but was immediately shouted down by a angry shirtless man yelling from the pool. And that’s all just the first five minutes. The video is over 40 minutes long.

In the end, despite all the bullshit, one clear consensus did manage to emerge: If these people are the future of finance, then we should all pray for a return to the past.

“It only took 37 seconds to spiral out of control.”

37 seconds!!! As unpredictable as crypto is some things stay the same;-)

I cant figure out what Roger Ver’s deal is but in my opinion he is toxic for crypto community. Does he really Believe Bcash is better or the real Bitcoin, Is he motivated by greed/financial gains, or is it an ego thing?

The fact that he has so much brand power and is using that power to his benefit is upsetting.

Roger is kind of telling people what they should buy.

I agree, the first 4 minutes were…difficult lol. Jimmy trying so hard to be civil. Roger being roger. And heckling cruise goers already 3 margaritas in.

To see Roger try to take claim for the success of BTC. As if it wouldn’t have succeeded without him lol

… shows plain as day how narcissistic and deranged he really is.

Personally thought it was pretty pathetic tbh. More of an argument than a debate, both sides avoided answering the most pressing questions. They’re clearly very intelligent people who struggle to deal with differing opinions.
I could imagine roger being the kid at school who had a melt down anytime he never got 100% in a test paper.

I dont think roger is just a really good troll. I think he actually believes his own bullshit.

Here’s Jimmy’s blog post on the debate and why BCH is fiat money. This is the text of what I prepared in my debate with Roger Ver. I wanted to post this here as a reference.

I can imagine Roger being the kid at school who had a meltdown any time he didn’t get his way.

Superb article that anyone interested in bitcoin should read.