Craig Steven Wright, the man who has, on various occasions, claimed to be Bitcoin’s legendary creator (or creators) Satoshi Nakamoto is trying to build a cryptocurrency and blockchain patent empire.

A recent Hard Fork investigation showed the World Intellectual Property Organization (WIPO) had published 95 patents applications filed by Wright – all of which were submitted under nChain Holdings Ltd, where he is the chief scientist, a role he’s held for well over three years and the only one featured in his LinkedIn profile.

We wanted to delve deeper into the data to understand the true extent of his empire, so we widened our original search criteria to include ‘Wright’ and ‘nChain’ alongside the original terms.

As part of our analysis, we looked at published patent applications – that is submissions made publicly available by WIPO. Although published and granted patents can look very similar, they are not the same thing.

Typically, a patent application is published several months after it is first submitted to make the public aware of potential innovation in a particular space.

The applications are published alongside a response from the International Search Authority (ISA) to give applicants an idea of what is innovative and what isn’t. Approval relies on whether or not the patent office deems it truly “innovative.” 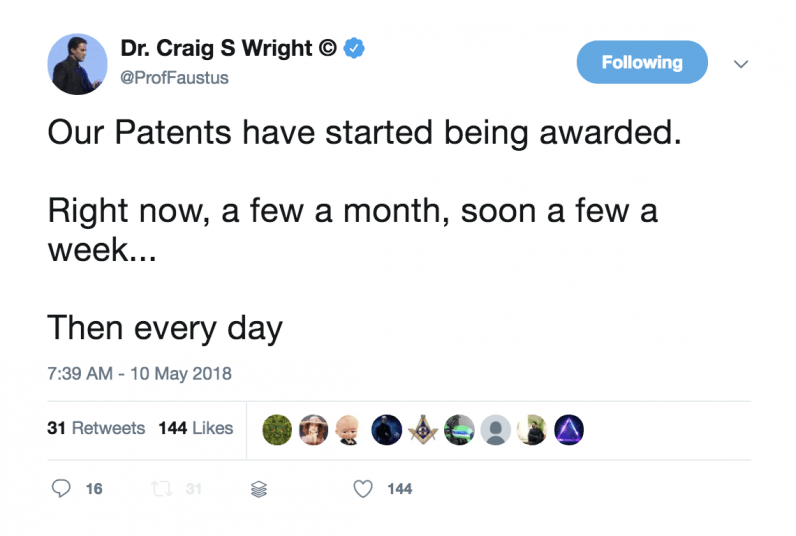 Our most recent analysis found WIPO had published 155 patents filed by Wright over the past 19 months – with the earliest publication date relating to August 31, 2017.

If (and only if) the patents are approved, this would mean Craig has the monopoly on the use, production, and distribution of the patented idea, potentially making many in the cryptocurrency and blockchain industry considerably uncomfortable.

Craig Wright is submitting more patents than ever

Year-on-year activity showed that WIPO published 35 of Wright’s patents in 2017. But 2018 proved to be an even better year, as 84 patents were published – more than double the amount of those made publicly available in 2017.

Interestingly, Wright has had 36 applications published so far this year. If he continues to submit patents at the rate he did previously, it’s possible he’ll exceed the numbers obtained in previous years by the end of 2019. 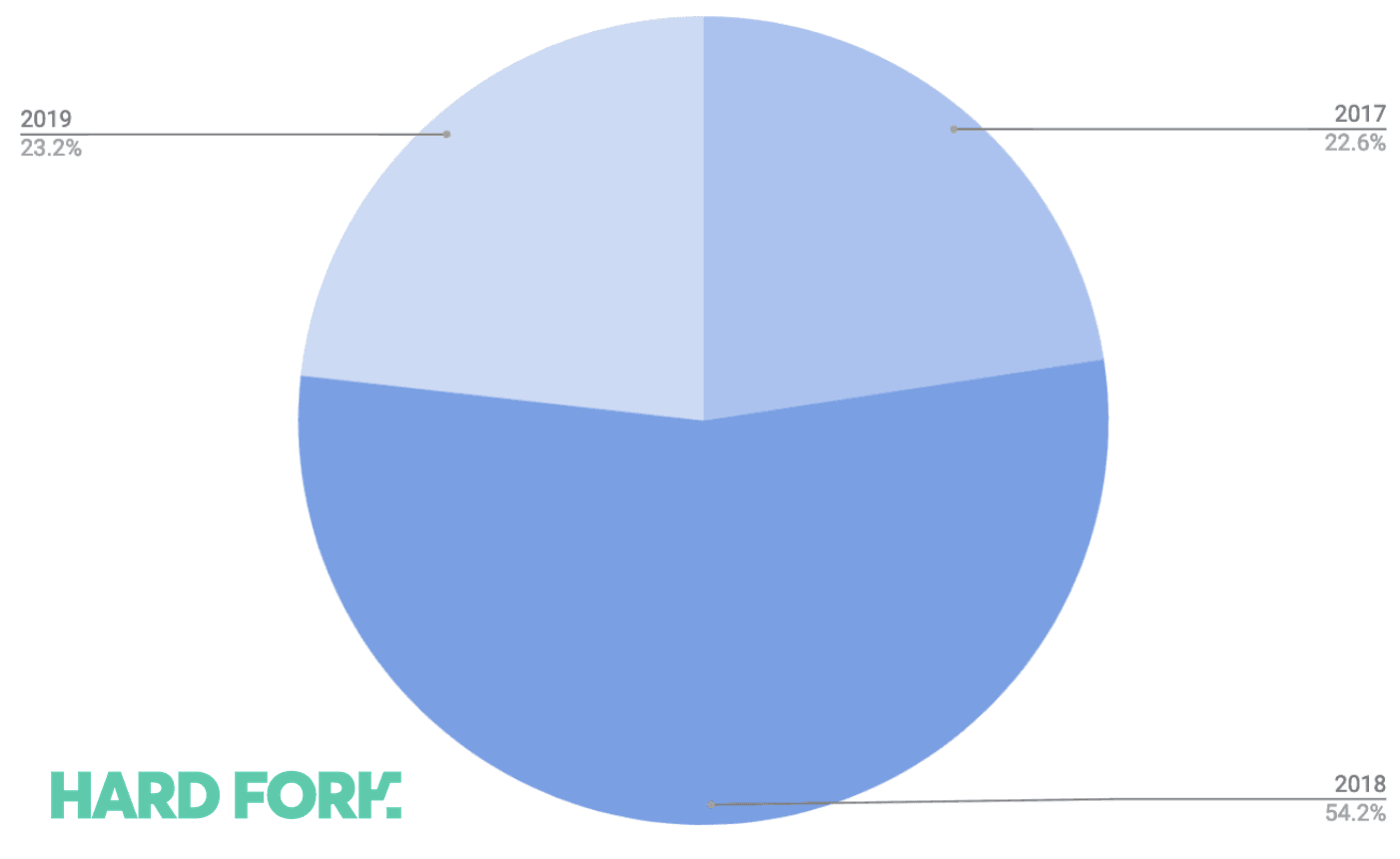 The vast majority of Wright’s patent applications relate to blockchain technology. In fact, our search showed that the term ‘blockchain’ was used 114 times in patent titles. In stark contracts, ‘cryptocurrency‘ only featured six times. ‘Bitcoin‘ didn’t feature at all.

Then, we dug a little deeper and our search revealed there were 10 instances of ‘smart contracts’. Meanwhile, the terms ‘digital asset’ returned 12 results.

Wright has been quite open about his patent quest on Twitter, where he answers followers’ questions and shares his patent filing methodology.

His activity has drawn criticism from industry pundits, who notoriously oppose the notion of intellectual property ownership, but it seems Wright is intent on patenting his ideas and isn’t scared to publicly acknowledge this. 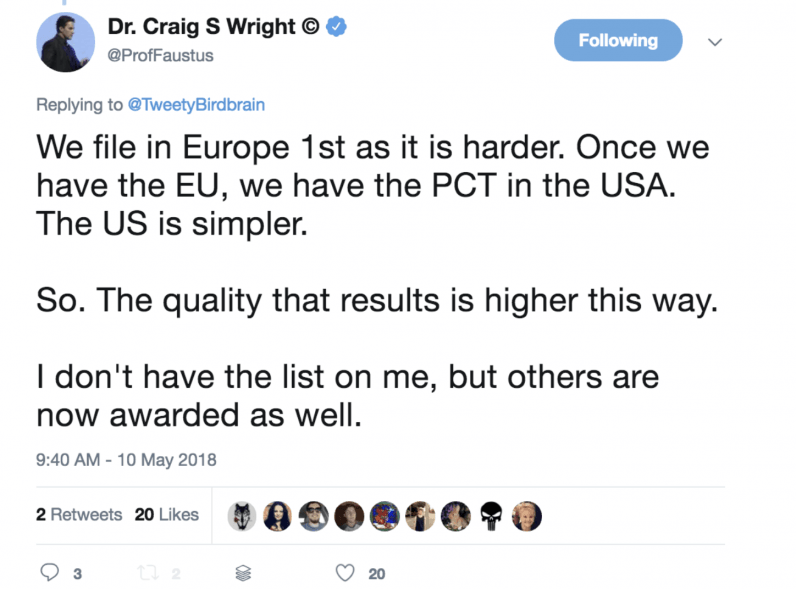 It’s hard to estimate how much money Wright has spent on patent applications thus far because the costs change considerably from country to country (and even within a country).

The cost of patenting an invention depends on various factors, including the nature of the invention, its complexity, the length of the application, possible objections raised during the process, and patent attorney’s legal fees.

It’s also worth noting that once a patent is granted, holders are sometimes required to pay maintenance or renewal fees, typically on an annual basis.

Wright’s comments and ongoing rhetoric haven’t won him many fans, but he’s not seemingly bothered: 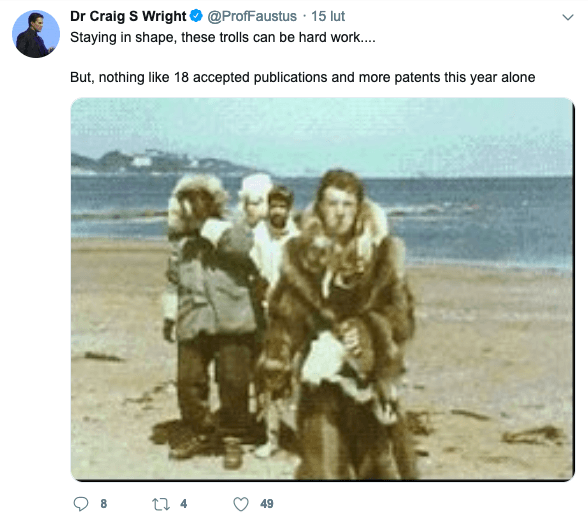 Wright first came into the Bitcoin foreground in 2015, after two simultaneous investigations by Wired and Gizmodo alleged he could have invented the cryptocurrency, although subsequent reporting raised serious concerns that his claims were part of an elaborate hoax to impersonate Bitcoin‘s mysterious creator.

Just hours after the Wired investigation saw the light of day, Craig Wright’s home and an associated business address in New South Wales, Australiawere raided by the country’s Federal Police, which at the time said it was part of an Australian Tax Office investigation.

Several months after that, in May 2016, The BBC and The Economist ran articles claiming Craig Wright had digitally signed messages using cryptographic keys created during Bitcoin’s early development stages. The keys are inextricably linked to blocks of Bitcoins known to have been mined by Nakamoto.

Then, Craig Wright published a blog post on the now defunct www.drcraigwright.net website linking himself with Nakamoto and posted a message with an attached cryptographic signature. But, Dan Kaminsky, a security researcher said Craig Wright’s claim was a scam and Bitcoin developer Jeff Garzik – now subpoenaed in a multi-billion dollar lawsuit against Wright – agreed the evidence provided by him didn’t amount to much.

Since then, Craig Wright has continued to claim he is the real Nakamoto, despite never providing concrete supporting evidence.

He’s now been branded “a patent troll,” but the criticism is unlikely to deter him from his mission and I’m sure the patent applications will just keep on coming whether the blockchain and cryptocurrency community likes it or not.

SCO, The SCO Group, The TSG Group, Caldera Systems, and Caldera International are the various names of an American software company that became known for acquiring the Santa Cruz Operation's Server Software and Services divisions, and UnixWare and OpenServer technologies, and then, under CEO Darl McBride, pursuing a series of legal battles known as the SCO-Linux controversies. The company was part of the Canopy Group, but became independent in March 2005, after the settlement of a lawsuit betw...

Edit: the one to be scared of is Microsoft.