It's Official: The Real Bitcoin Bro

“If you look up the word stupid in the dictionary, there’s a picture of you,” went the sickest burn on the elementary school playground, back before the dictionary was dishing out sick burns of its own. Now Google basically is the dictionary, and real people’s pictures come up when you perform a Google Image search for stupid. My recent results included a man with a condom over his head, a teenage boy in a hospital after attempting to complete the Duct Tape Challenge, and—I’m pleased to report—many pictures of Trump.

It’s a well-acknowledged problem that Google’s algorithm determines what images are associated with your name—it’s decided, for example, that a still of Rachel Withers, Commuter looking distraught the morning after Election Day 2016 is the second-most important image of me to share (though this is my own fault, for attaching it to an article about being distraught). Many sites and services offer recommendations as to how to rid yourself of unfavorable Google Image results. BrandYourself, for example, suggests that you “create tons of positive images associated with your name that will ultimately overwhelm any image results of yours that are less than flattering.”

But Google Images has another influential labeling power: It determines whose face best represents a search term. And unlike your name, it’s not clear exactly what you’re supposed to do if you become that face. Everyday people appear under “cat lady,” “feminazi,” or “douchebag.” Of course, Google is only curating these online images according to relevance—humans are the ones who have attached such meanings to them through tags, captions, and accompanying text. But is it OK for Google to consign innocent and sometimes unknowing people to become exemplars of a stereotype?

One Australian man found out exactly how unfairly Google can categorize you when it began linking him to the Melbourne gangland killings—a retributional gang war that terrorized and fascinated Melbourne from 1998 through 2010. Milorad Trkulja’s picture began appearing under searches for “Melbourne underworld criminals” sometime after he was shot by an unknown gunman in 2004, right in the midst of the killings. Trkulja, who says he has been unfairly associated with the Melbourne underworld, has been waging a legal war with Google since 2012, when he successfully sued the search engine for defamation (and $200,000). But his images did not come down. He sued again in 2013, seeking more money and an injunction to have his image removed from Google, but state courts blocked his attempts. Last week, the Australian High Court granted him permission to proceed. (Someone should probably tell him that all this media attention probably explains why he is still at the top of “Melbourne underworld criminals” search results.)

Don’t expect this kind of legal action against Google to take off here in the U.S., where defamation law leans much more in favor of the defendant, with the onus on the plaintiff to prove the material false as well as negligent or malicious. In Australia, the onus is on the defendant to prove their claims are true, and they don’t have to be negligent or malicious to be liable. (In fact, some suggest that it is Australia’s strict defamation laws that have prevented a full-scale #MeToo reckoning from taking off). The U.S. also offers websites immunity from defamation liability over things shared on its platform. But whether or not you have legal recourse, it’s clear that Google Images can still mischaracterize you and your image in a highly public way.

Of course, Google isn’t actually making character judgments about you. Its algorithm ranks relevant images based on data attached to it—data that were ascribed to it by a human. Google didn’t determine that Trkulja looked like a mobster. It was only reflecting information about him available on the web. But it’s this kind of problematic human input that has seen Google’s algorithms accused of perpetuating racist stereotypes. And once the idea that a person’s image represents a “type” is out there among the top results, it’s self-reinforcing, as more and more people use the top hit to make a point or a meme or an assumption. Sometimes, these multiplying image are of models found in stock photos, images that the photo company has intentionally labelled “millennials” or “woman eating salad.” But just as everyday people can become memes, sometimes a regular person becomes a top Google Image result—the face that the digital encyclopedia thinks is the most useful depiction.

If you’re wondering what a “basic bitch” looks like, Arielle Tchiprout, a 23-year-old writer and journalist living in London, is currently among the top images chosen by Google Images to represent that term, amid the Ugg boots and Starbucks. Google shows Tchiprout at a beauty event, sitting on a giant mascara-shaped bench surrounded by her basic-bitch friends laughing and drinking—what else?—pink champagne. Tchiprout says she wasn’t aware of her prominence on Google Images before I emailed her, but she doesn’t mind. After all, basic bitch is a label she embraces, blogging about it on her blog Millennial Pink. (The image comes from her post “How to Be a Graduate Basic Bitch in London.”) “I’m sure ‘basic’ takes on different meanings wherever you go, but for me it’s about dressing the same way, writing the same old Instagram captions and going to all the same events and bars,” she tells me in an email. Like me, she knows her Google legacy is her own fault. “I don’t mind my picture coming up—I’ve written quite a lot of commentary on ‘basic bitch culture’ so I know this is something I have done to myself!” she writes. “I don’t see it as a particularly offensive term, so it doesn’t bother me.” She added that the other girls in the picture find the situation hilarious.

Peter Saddington, another Google Images top hit, also doesn’t mind his photo’s prominence. The 35-year-old former coder posing with his white Lamborghini is one of the first results for “Bitcoin bro,” thanks to a headline on Maxim. He says he wasn’t aware of that fact but that it makes sense: Friends often send him links to random Russian ads using his likeness. Saddington, who also identifies as a husband and father, is happy to be one of the faces of bitcoin bros … but that’s possibly because he is a bit of a bitcoin bro. “I don’t see it as a negative thing. I see it as a very powerful thing. It’s a very powerful meme that can bring people into it. I kind of relish in it, but I don’t spend too much time thinking about it. I’ve got work to do,” he says, before asking me whether I’d ever invested in bitcoin.

Janna DeVylder is by now used to the fact that her misery became a meme. The native Iowan, who currently lives in Sydney, became the face of distraught liberals when trolls turned a photo of her reacting to the 2016 election broadcast into a meme. But though the meme has mostly died down, her legacy lives on as the top result for “crying liberal“ and “crying Hillary supporter,” something she sometimes uses as a party trick. (When her kids tell her she’s a dead meme, she always points out that she’s still No. 1 on Google Images.)

DeVylder’s ability to laugh at the situation is admirable, especially considering the hate with which her likeness was handled as the memes proliferated. She said she had to be able to rationalize it—the hate was directed at the image, at a stereotype, not at her: “I can rationalize it’s not me … they’re talking about me, but they’re not talking about me.” Once a picture of you is a Google Images top hit, it’s not really you anymore. “It’s not me anymore. It’s not mine. It never was mine,” she adds. She did attempt to reclaim it in her own small way, in a 2016 Medium post. But she knows that the image is out of her control for the rest of its high-profile existence.

How long will that be? DeVylder’s likeness has stuck around longer than she originally anticipated: It made a recurrence as a Super Bowl meme, and she’s bracing herself for the November midterms. Google Images are unfortunately circular. Is a basic bitch not whatever Google says it is? An image that Google has dubbed a bitcoin bro is no doubt still being added to webpages in need of a stereotypical crypto-millionaire. We know the chicken came first, but it keeps laying eggs. As a spokesperson said after Trkulja’s original lawsuit, “Google’s search results are a reflection of the content and information that is available on the web.” But Google is also responsible for multiplying the content available on the web. What does a crying liberal look like? The answer will—probably—always be DeVylder.

8 Likes
Everything You Know About Bitcoin is Thanks to This Czech Grandpa
Introducing GiveCrypto.org
john June 26, 2018, 5:06am #2 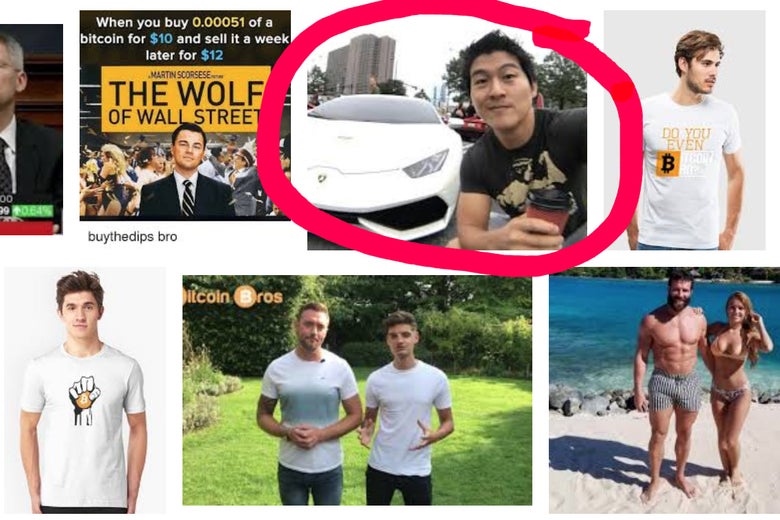 What It’s Like When Google Uses Your Picture Under Results for “Bitcoin Bro” and...

We salute the sense of humor these people have about being the poster children for some less-than-flattering terms.

What is this? Lol. I’m also a pro bitcoin person but buying more etc to put into bitcoin later.