1/ Since Shapeshift’s announcement, there’s been a lot of confusion and accusations against Shapeshift and @ ErikVoorhees . IMO it’s simple as this: BSA requirements enforced by FinCEN. To violate that results in criminal charges (aka JAIL time).

📰🦊ShapeShift has big news for our users! We are now offering a new membership program, that will provide users with more benefits & a better user experience. Find out why we are making these changes from our CEO @ErikVoorhees: bit.ly/2Q2dYAy https://t.co/PiTk26xVkA 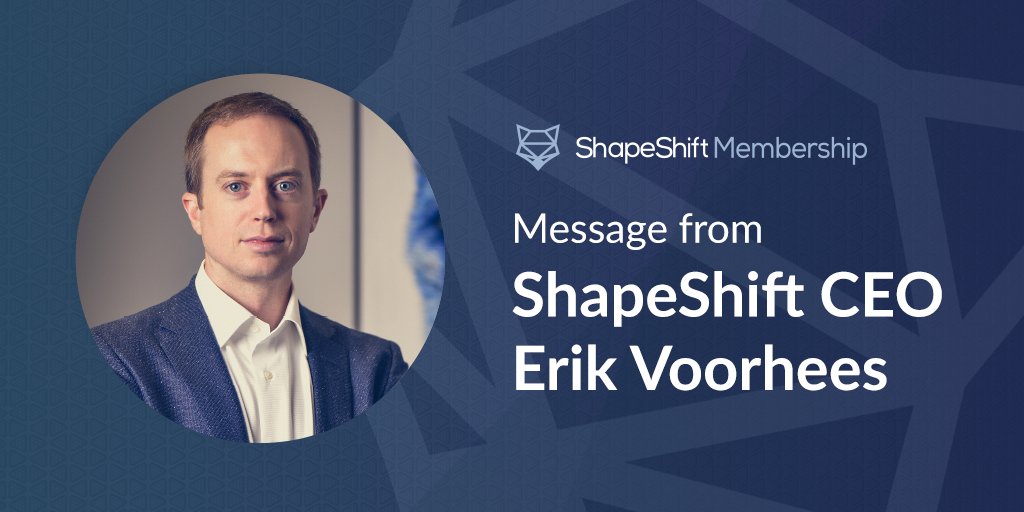 2/ Why is the criminal charge component such a huge consideration? Because it is much more serious than securities fraud (civil charge by SEC), which generally is a penalty & bar from serving as an officer or director of a public company for some years…not jail.

Yes, I am talking about AML (Anti-Money Laundering) Laws. AML laws were established by the Bank Secrecy Act of 1970 (BSA), and FinCEN acts as the designated administrator of the BSA.

3a/ To be annoying for one second: KYC is just one small part of AML. Saying “AML/KYC” is like saying “Vegetable/Broccoli”. AML encompasses a ton of other requirements, which I won’t go into for now. Moving on…

4/ You do not want to fuck with the BSA. The BSA’s mission is to prevent financial institutions from "the abuses of financial crime, including terrorist financing, money laundering and other illicit activity…”

Read that again. Of course the penalties are going to be severe.

5/ So…back to FinCEN and why it matters (or why it even has jurisdiction…) here. Like I said earlier, as an administrator of the BSA, FinCEN basically gets to administer requirements under the Act if they designate your business as a “money service business” (MSB).

5a/ To be clear: The BSA is sometimes referred to as an anti-money laundering law (AML), or jointly as BSA/AML. For purposes of this thread, I will stick with BSA else it just gets confusing.

6/ The Director of FinCEN recently made a statement (h/t Jesse Overall) that established its jurisdiction over those “involved in money transmission denominated in convertible virtual currency.”

6a/ Specifically, those "engaged in the business of accepting & transmitting physical currency or convertible virtual currency from one person to another / to another location are money transmitters subject to the AML/CFT requirements of the BSA and its implementing regulations.”

7/ Of course, without knowing for certain whether the coins on Shapeshift are considered "convertible virtual currency” or “securities”— it means only one thing: that you have to assume both FinCEN/SEC jurisdictions. (Yes, I know this is annoying. Blame the system.)

8/ Per 6 and 6a, Shapeshift is under FinCEN jurisdiction as a MSB & subject to the BSA’s requirements. FinCEN has made it very clear— dating back to 2011, and again in 2013— that its regulations relate to MSBs that are “administering, exchanging, or using virtual currencies."

9/ So we’ve established FinCEN jurisdiction. Now we can go into AML. What does that actually mean? Like I said, Know-Your-Customer (KYC) is a part of AML. That includes (at the very least) verification of the identity and address of the customer. No way around that.

Are we really surprised that a CEO of a well-known crypto company is cautious in his public statements?! Regulators sent out huge a wave of subpoenas earlier this year. Also yes, they look at your social media channels too.

@taoeffect @SauceryCoin @real_vijay @peterktodd What I write is being watched very closely. Please give us time.

11/ Let’s not forget that Erik Vorhees was charged by the SEC back in 2014 for selling unregistered securities. This means that he has extra reason to be cautious when it comes to issues that may run afoul of regulations. Like, HE’S BEEN THERE.

12/ I don’t believe that Shapeshift had much to gain (by way of PR/industry rep) by making this announcement, and I certainly don’t see it as @ ErikVoorhees being “shady”. In other (sassier) words: the shock and surprise to the announcement is shocking and surprising.

13/ The regulatory situation we are in today for the crypto industry is incredibly frustrating.

So…hate on the rules and laws that are in place. Not on the people (esp. CEOs of well-known crypto companies) who are trying to stay out of jail by complying with the law.