By CCN Markets: Many large-cap cryptos such as Litecoin and Ethereum have soared in the last few weeks. While these cryptocurrencies have been enjoying substantial gains, others, including NEO, have not fared as well. It appears that we are not the only ones noticing how the coin dubbed the “Chinese Ethereum” has fallen behind its peers.

In fact, @tradingroomapp predicted that NEO will move higher against both bitcoin and TetherUS: 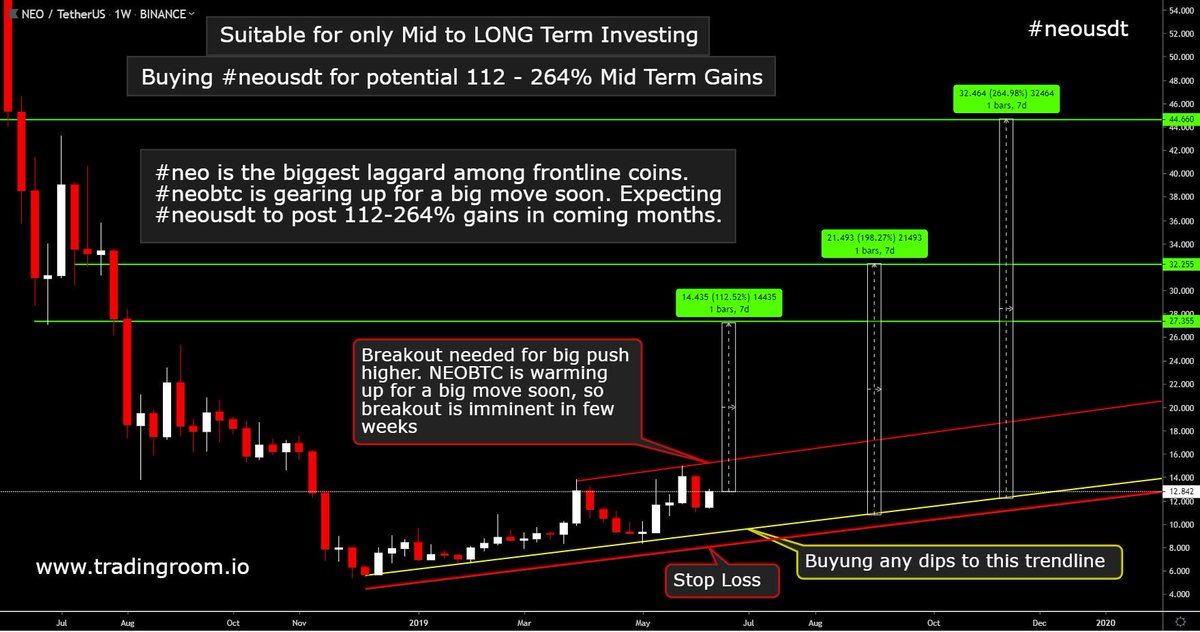 The June 13 tweet also comes with a chart that clearly illustrates the logic behind the call. According to Trading Room, NEO is moving in an ascending channel on the weekly timeframe. The image also notes that NEO is a buy on dips candidate as long as it respects the uptrend line or diagonal support of the channel. On top of that, the chart image mentions that the cryptocurrency must take out the diagonal resistance to get the fireworks going.

Should NEO take out the diagonal resistance of the channel, Trading Room outlined three target prices. Those are $27.355, $32.255, and $44.66. At the time the tweet was posted, the cryptocurrency was trading at $12.842. Since then, NEO has made incredibly bullish moves that support Trading Room’s thesis.

It hasn’t been a week since the analyst made the call and the cryptocurrency is already moving as expected. A quick look at the three-day chart shows that NEO has taken out resistance of $13.00. This triggered the breakout from a large ascending triangle pattern.

The breakout signals the end of the market’s downtrend from the macro perspective. More importantly, the ascending triangle breakout has a target price of $20.50 based on the pattern’s height.

If NEO achieves that target price, the cryptocurrency can hit two birds with one stone. It can take out the horizontal resistance of $20.00. More importantly, it can push the crypto token above the diagonal resistance of the ascending channel. Should that happen, the Trading Room predicts that a big breakout will take place and this crypto would reward investors with handsome gains.

Bottom Line: This Coin Appears to Be Looking to Play Catch-Up with Other Cryptos

Recent price action appears to support the analyst’s forecast. Ideally, it could hold $13.00 and flip the former resistance into support. The defense of this price area could help NEO to generate the momentum to target $20.50. By then, mid- and long-term investors might start celebrating. The cryptocurrency could hit targets presented by the analyst.

Disclaimer: The views expressed in the article are solely those of the author and do not represent those of, nor should they be attributed to, CCN Markets.

Compelling TA. I was into NEO back in the AntShare days and while there was a lot of hype about it become the next Ethereum, I felt like this never really materialised however and sold my bag and stopped following the project a while back. Is NEO now being used for any compelling cases?

I still keep some NEO from the previous 2017 hype,
Same question - anyone into it…
previous ATH unrealistic.?

I still have a sizeable portion of Neo in my portfolio. It’s not doing well in Satoshi value, but it hasn’t disappointed me in $ value. I think NEO has a chance of surpassing previous ATH once more meaningful dapps are available. Plus Nash exchange will hopefully be a decent DEX that also runs on NEO.

NEO boom: 35% rise in a matter of minutes

shared from other thread,
hope this would continue… as you mentioned @seikin