A new report from Bitmex Research suggests that the most dominant miner (presumably, Satoshi Nakamoto, the mysterious creator of Bitcoin), has generated around 700,000 BTC. This number is somewhat lower than what blockchain researcher Sergio Demian Lerner said it to be back in 2013.

Does Satoshi have a million bitcoin? Although the evidence is far less robust than many assume, there is reasonable evidence that a single dominant miner in 2009 could have generated around 700,000 bitcoin. 1 million bitcoin may be an overestimate blog.bitmex.com/satoshis-1-mil… https://t.co/RkE8khEA8S 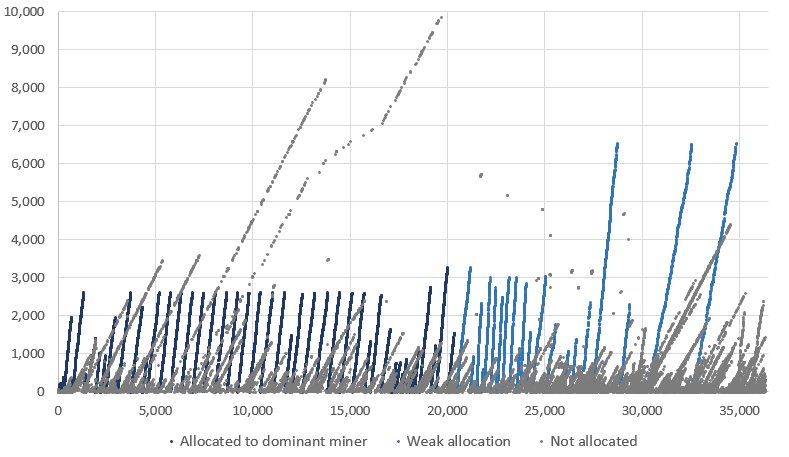 In today’s blog post Bitmex Research analysts recall that towards the start of April 2013 Lerner attempted to argue that Satoshi had mined a million BTC in 2009.

“The logic behind this assertion was that the hash rate throughout 2009 was at a low level, around 7 million hashes per second and this was said to be consistent with one miner being highly dominant. At the same time this hashrate was around the same to that which was present in Bitcoin’s first 14 days, which Sergio assumes may be a period in which Satoshi was the only miner,” the document reads.

There was initial skepticism towards Lerner’s conclusion, however, a few days later Sergio came up with a far more persuasive argument, with much stronger evidence that a single miner was dominant. This new evidence eventually convinced many in the community and to this day many people believe Satoshi is likely to have mined around one million bitcoin.

Sergio published the below picture, with the ExtraNonce on the y-axis and the blockheight on the x-axis (He incorrectly labeled the x-axis as time).

The image shows that the ExtraNonce increase over time, in a series of slopes. Some of the slopes (in black) are said to be of a similar gradient, not to overlap and to go back down to zero once they reach a certain height. This is said to demonstrate that all the black lines belonged to one miner (potentially Satoshi) and that this miner now controlled almost a million Bitcoin.

The analysts agree, that even though the image itself may be quite difficult to appreciate and evaluate from the technical point of view, it is clearly very powerful and persuasive. However, they argue that after deciding to repeat Lerner’s analysis, the evidence is far less robust than many have assumed.

The analysts say that up to August 2009 they agree with Sergio’s conclusion. Specifically, they not that there are 22 slopes prior to that timeframe, which all have both similar height and gradient (Around an increase in the value of the ExtraNonce by 4 per block found). At the same time these slopes almost never overlap. (The tiny amount of apparent overlap in some instances in less than 5 blocks and therefore may just be coincidence).

“Therefore although the image still looks compelling, the evidence that the miner is one entity is somewhat weak, in our view,” BitMEX researchers adds.

The results, which include figures both pre and post August 2009, are shown below:

On an important note, the analyst stress that the “exercise was quite challenging, since the slopes interact with many other points”.

“It is therefore impossible to do an accurate allocation. As a result, our analysis is far from perfect and we used a variety of methods, including statistical analysis, random number generators and even manual review to allocate some blocks. We will have made many errors and we do not claim our methodology is robust or scientific.”

Nevertheless, in their view, “the evidence only supports the claim that the dominant miner may have generated significantly less than a million bitcoin. Perhaps 600,000 to 700,000 bitcoin is a better estimate.”

“However this is in a slope of just 11 blocks, so it’s certainly not conclusive. Whoever the dominant miner was, it is of course possible the keys have been lost or discarded by now,” they conclude.