No One is Crazy

At one point last week Florida was selling 550 lottery tickets per second.

For perspective, that’s 2% of what the entire Visa payment network can handle. The $2 billion Mega Million/Powerball jackpot was worth more than nine states spend on K-12 education each year.

Of course, the odds of winning were about 1 in 300 million. It’s the equivalent of taking the entire US population, picking one person at random, and that person being your mother.

The lowest-income households in the U.S. on average spend $412 annually on lottery tickets, which is nearly four times the $105 a year spent by the highest-earning households.

Four hundred bucks is the same amount of money that 40% of households cannot come up with in a pinch. Low-income Americans are blowing their emergency funds on a 1-in-300 million flier.

They must be crazy.

I’ve heard that a lot over the last few weeks. But let me stop you right there.

No one is crazy .

Oh, can they ever.

But the decision to buy a lottery ticket – or a stock, or a house, or whatever – makes sense to them in that moment and checks all the boxes they need to check. Every decision everyone makes is rationalized in their head when they make it.

The cornerstone of behavioral finance is that most people assume it’s a field whose documented flaws apply to other people, but not themselves . That’s because we judge others based solely on their actions, but when judging ourselves we have an internal dialogue that rationalizes what others identify as bad decisions. We rarely hear the internal justifications other people have for their mistakes, but we’re keenly aware of our own. Daniel Kahneman begins his book: “The premise of this book is that it is easier to recognize other people’s mistakes than our own.”

Virtually everyone reading the Bloomberg article, and this article, has above-average income, assets, education, career advancement opportunities, etc. So it’s hard for many of us to intuitively grasp the subconscious reasoning of those in the lowest income quartile, who purchase the most lottery tickets. But you can imagine it going something like this:

We live paycheck to paycheck and savings seems out of reach. Our prospects for much higher wages seem out of reach. We can’t afford nice vacations, new cars, health insurance, or homes in safe neighborhoods. We can’t put our kids through college without debt. Much of the stuff you Bloomberg/Collaborative Fund readers either have now, or have a good chance of getting, we don’t. Buying a lottery ticket is the only time in our lives we can hold a tangible dream of getting the good stuff that you already have and take for granted . That’s why we buy more of them than you do.

A lot of decisions are statistically wrong but intuitively right for the person making them.

Why did otherwise smart investors buy internet stocks in 1999? The easy answer is: “Because they were irrational and greedy.” That was true for some people. But others – I’d say most – didn’t actually think the discounted future cash flows of Cisco Systems were worth $600 billion. They thought Cisco stock would go up next week. And given the momentum of the previous five years, that wasn’t a crazy bet. Most investors probably rationalized what they were doing in ways that weren’t that crazy, even if they turned out to be absolutely wrong.

Same with housing. What kind of maniac pays a zillion dollars for a Miami condo in 2005? “A crazy idiot,” you might say.

But look at the percentage of Florida homes whose previous owner held the property for less than six months. The marginal buyer in 2005 didn’t care about long-term price-to-income ratios. It’s easier to rationalize overpaying for a house to flip next month than it is a long-term purchase: 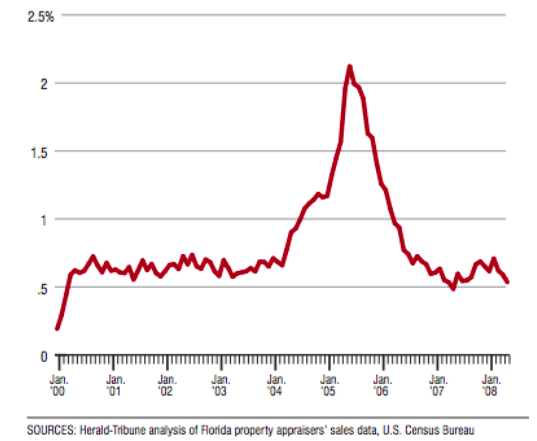 You don’t have to think any of these decisions were right. You certainly don’t have to consider them smart. Most weren’t. But they probably made sense to the people who made them at the time based on reasoning that you may actually empathize with if you could hear the internal narrative in their heads.

People are often wrong, but few are crazy.

Two things come from that:

1. Be careful taking cues from other people when you have no idea what they’re thinking.

Many finance and investment decisions are rooted in watching what other people do and either copying them or betting against them. But when don’t know why someone behaves like they do, you won’t know how long they’ll continue acting that way, what will make them change their mind, or whether they’ll ever learn their lesson. Bubbles claim victims when short-term momentum entices traders with ever-shortening time horizons, who then inadvertently influence the behavior of long-term investors.

Few people make financial decisions purely with a spreadsheet. They make them at the dinner table, or in a company meeting, where personal history, your own unique view of the world, ego, pride, marketing, and odd incentives are scrambled together into reasoning that can look crazy to others, but weaves together a narrative that works for you. I do this. You do it. The fun part of behavioral finance is learning about how flawed other people can be. The hard part is trying to figure out how flawed you are, and what stories make sense to you but would seem crazy to others.

It’s just really the fact that nobody knows anything pretty much 100% of the time.