"there are a number of ways CBDC might improve the payments system and include faster and cheaper transactions, addressing a decline in the use of physical currency, and reaching consumers who have been traditionally underserved by financial...

In what remains the most undercovered financial topic of the year, if not century, we remind readers that starting about a year ago, central banks around the world launched an unprecedented if stealthy attempt to overhaul the entire monetary architecture of fiat money by implementing digital dollars, a transformation to a cashless society which in recent months has also received the tacit support of Congress, which is actively drafting bills to send “digital dollars” to the unbanked. For those just catching up, read the following recent articles:

Since we have done so on numerous occasions in the past, we won’t discuss the staggering implications of such a transformation when (not if) it is implemented over the next few years, instead pointing readers to recent thoughts from DoubleLine fixed income portolio manager Bill Campbell, who warned that “Pandora’s Box Of Fed’s Digital Currency Will Ignite An "Inflationary Conflagration” - which is spot on in its assessment that this is at its core a central bank Hail Mary attempt to spark drastic inflation across the globe in hopes of “reflating away” the world’s untenable debt load - and whose conclusion is striking:

The temptations of CBDCs are not limited to excesses in monetary policy. CBDCs also appear to be an effective mechanism for bypassing the taxation, debt issuance and spending prerogatives of government to implement a quasi-fiscal policy . Imagine, for example, the ease of enacting Modern Monetary Theory via CBDCs. With CBDCs, the central banks would possess the necessary plumbing to directly deliver a digital currency to individuals’ bank accounts, ready to be spent via debit cards.

Let me quote again from Charles I. Plosser’s warning in 2012: “Once a central bank ventures into fiscal policy, it is likely to find itself under increasing pressure from the private sector, financial markets, or the government to use its balance sheet to substitute for other fiscal decisions.” With a flick of the digital switch, CBDCs can enable policymakers to meet, or cave in to, those demands – at the risk of igniting an inflation conflagration, abandoning what little still survives of sovereign fiscal discipline and who knows what else. I hope the leaders of the world’s central banks will approach this new financial technology with extreme caution, guarding against its overuse or outright abuse. It’s hard to be optimistic. Soon our monetary Pandoras will possess their own box full of new powers, perhaps too enticing to resist.

We bring all this up because earlier today, hot on the heels of recent announcements by both the ECB and BOJ which recently discussed their ongoing preparations to launch digital currencies, Fed Chair Jerome Powell spoke at a panel focusing on Cross-Border payments hosted by the IMF during its annual meeting, in which he said that the central bank hasn’t made a decision to issue a digital currency, citing the need for further work and “extensive” public consultation with stakeholders before doing so.

“It’s more important for the United States to get it right than to be first,” adding that “we are committed to carefully and thoughtfully evaluating the potential costs and benefits of a central bank digital currency for the U.S. economy and payments system. We have not made a decision to issue a CBDC.”

And while one would be temped to interpret Powell’s statement as one of skepticism that Digital Dollars are coming, we believe this is misplaced with Powell emphasizing that "80% of central banks around the world are exploring the idea. " Powell also noted that of the $2 trillion in dollar currency in circulation - with this number spiking following the covid pandemic - about half remains outside the US. 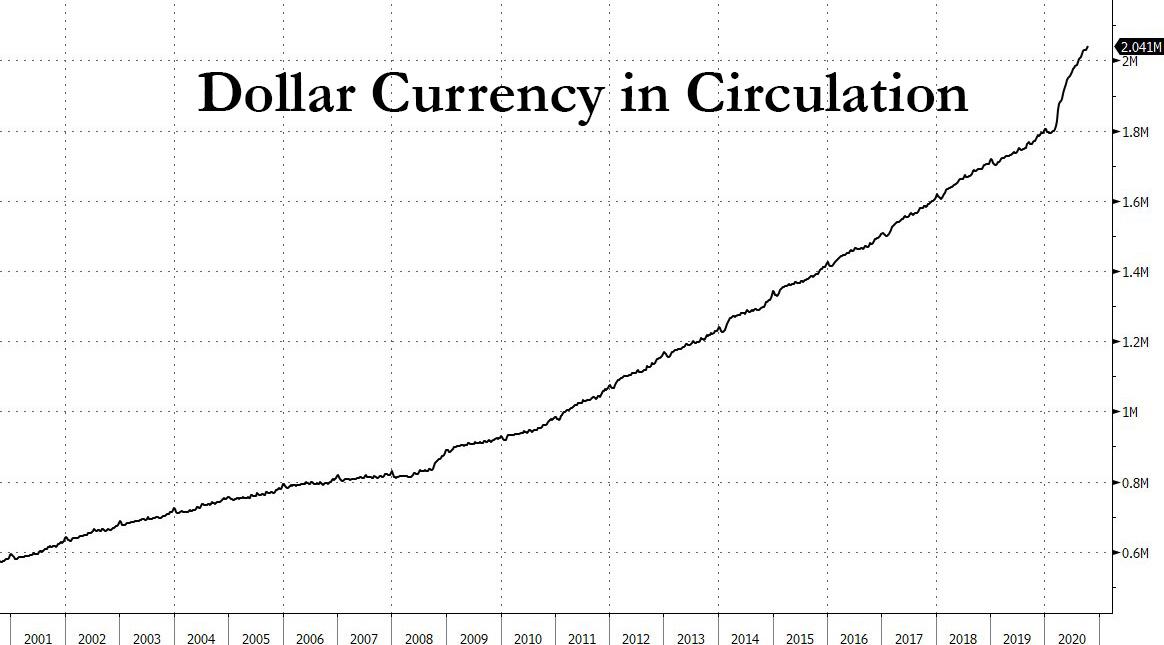 Meanwhile, even Bloomberg notes that “Fed officials have swerved sharply from their previously cautious approach to digital currencies, embracing a full-scale study on whether one might be suitable for the U.S.”

Powell also listed the main reasons why central banks are obsessed with to launching CBDCs, saying that “there are a number of ways that a CBDC might improve the payments system, and it is mainly this area that motivates our interest” which include:

… and the main reason cited by Powell: " reaching consumers who have been traditionally underserved by financial institutions", which is another way of say granting the Fed permission to make targeted direct deposits to virtually anyone, anywhere in the world at any given moment in time, in the process making obsolete such legacy institutions as Congress, Commercial Banks and the IRS, since the Fed has ultimate control over the lifespan of every single currency unit from inception to its eventual destruction at the hands of the Fed.

That said, while CBDCs are clearly coming, we expect a period of at least several years before their arrival, absent another major financial crisis, of course: “We have not made a decision to issue a CBDC and we think that there’s a great deal of work to be done”, Powell said.

Powell’s generic caveats aside, the die has been cast: as we reported in August, the Fed announced that it was expanding experimentation with technologies related to digital currencies. In addition, the Boston Fed is working with researchers at the Massachusetts Institute of Technology to build a “hypothetical” digital currency oriented for central bank use.

Other central banks around the globe have been more advanced in their preparations to roll out digital currencies: Sweden began an e-krona project in 2017 and has issued two reports on the topic. The Bank of Canada has launched a formal research project that has partnered with other monetary authorities. The Bank of Japan said earlier this month that it aims to start early phase experiments next year.

The full IMF panel on cross-border payments and digital currencies is below:

NEVER MISS THE NEWS THAT MATTERS MOST

ZEROHEDGE DIRECTLY TO YOUR INBOX

For those who need a crash course, on CBDCs, RealVision’s Raoul Pal had a good twitter thread on the topic yesterday:

I think that sooner or later digital currencies will be a reality, the people from different countries are already using digital currencies. You already have to talk about this new modality, you have to leave cash behind. In the future all that will be talked about and said will be about digital coins like MintMe