Samsung Doubles Down On Crypto With Support For Payments Blockchain Stellar

Samsung Doubles Down On Crypto With Support For Payments Blockchain Stellar

The Stellar Development Foundation (SDF), today announced the integration of Stellar into the Samsung Blockchain Keystore.

The Stellar Development Foundation (SDF), a non-profit organization that supports the development and growth of the Stellar network, today announced the integration of Stellar into the Samsung Blockchain Keystore.

The integration will allow Samsung device users to be able to securely store the private keys associated with their Stellar blockchain wallet. This solves what has traditionally been a challenging part of the blockchain user experience which is the ability to manage private keys in a secure manner. Typically, the more secure the solution, the more challenging the experience is for the user.

The ability to manage private keys in both a secure and user friendly way is a key hurdle that the blockchain community must clear if it is able to expand its appeal to a broader set of mass market users from the technologically inclined early adopters and hobbyists that predominantly use the technology today.

Most Popular In: Crypto & Blockchain

How Blockchain Will Bridge Consumption To Consciousness In The Jewelry Industry

“To have a really simple way for users to store their keys and utilize them on-chain is so important, and why we are excited about this announcement,” said Denelle Dixon, CEO and Executive Director of SDF in an interview.

While software wallets that store private keys on behalf of users on computers and devices have been available for some time, they have often suffered from security vulnerabilities as they share the phone, tablet or computer with other applications which can eavesdrop on the software and steal private keys. As a “bearer asset,” those with the private keys have full control over a user’s funds and recovery from theft is seldom successful.

A more secure approach is to use hardware level segregation, where a separate computer processor that can only be accessible by authorized software is used to protect keys from prying eyes. That’s a capability that has Samsung rolled out, as Forbes.com reported on earlier in the year.

“We created a secure processor dedicated to protecting your PIN, password, pattern, and Blockchain Private Key,” Samsung wrote on its website, announcing the new S20 Galaxy phones. “Combined with the Knox platform, security is infused into every part of your phone, from hardware to software. So private data stays private.”

Samsung has supported Ethereum since the release of its Galaxy S10 in March 2019, and then added bitcoin support in the summer of the same year. Since then, over 30 digital coins, including stable coins have been integrated into the phone.

With this integration, SDF has aligned itself with a formidable distribution partner; the electronics giant which makes up 19% of global smartphone sales and last year sold almost 300 million phones according to data site Statista.

While the wallet and Keystore is only available on a handful of devices and regions — Samsung Galaxy Smartphones: Galaxy S20 Series, Galaxy Z Flip, Galaxy Note 10 Series, Galaxy Fold, Galaxy S10 series — as people cycle through their devices to newer models, there will be a natural increase in adoption of Samsung devices that use the Stellar blockchain. 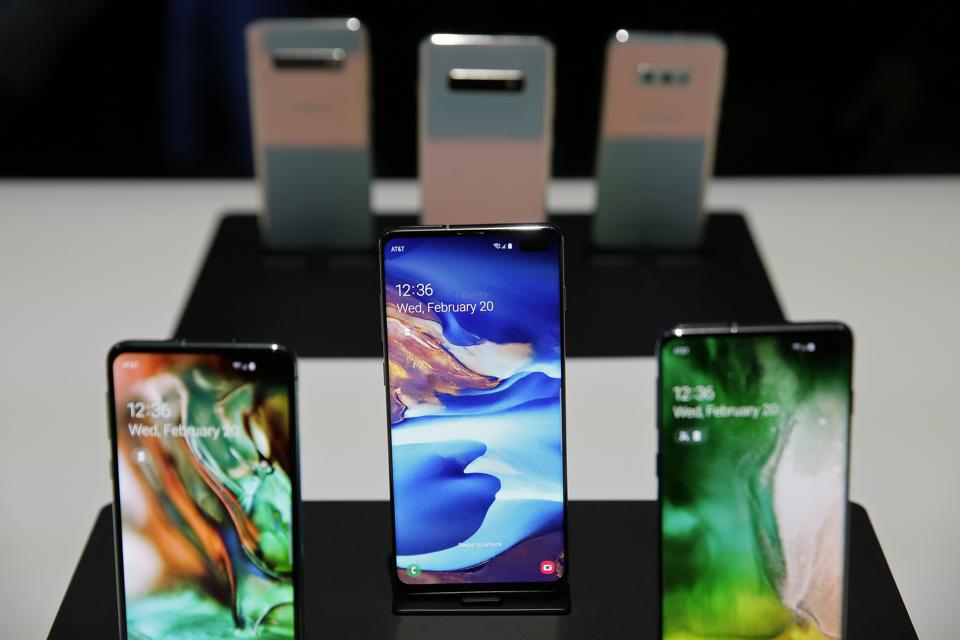 The new Samsung S10 phones are displayed in a demonstration room after an event Wednesday, Feb. 20, … [+]

“Stellar’s integration into the Samsung Blockchain Keystore is a significant step for our network and the incredible ecosystem of applications built on this platform. Samsung provides a key management solution that is user-friendly and drives greater adoption of blockchain technology. With this integration, we’ve opened up to a new network of users that can benefit from the combined innovation of Stellar and Samsung,” said Dixon.

For SDF, it’s not purely the ability to provide an easy-to-use key management capability that is exciting for the organization, it’s also the opportunity to further grow the ecosystem by providing a platform around which Stellar-based business can build innovative applications that can be used by users.

With Stellar’s blockchain services now being available through the Samsung Blockchain Keystore, Stellar ecosystem developers are able to create blockchain apps and services for Samsung Galaxy Smartphones, in addition to existing Stellar-based products and applications.

That’s a point reinforced by Dixon: “It’s just the beginning as we work together to empower more developers and users to leverage blockchain and the capabilities presented by this integration.”

At the time of announcement, at least four Stellar-based businesses have committed to adopting the requisite SDKs to make their applications available in the Keystore, including DSTOQ, SatoshiPay, Litemint, and Nodle.

The Smartphone Race Is On

Samsung is not the only phone provider to have dived into crypto. Phone manufacturer HTC was one of the first to market with the announcement in 2018 that its Exodus 1 smartphone would be able to natively store bitcoin or Ether cryptocurrencies.

Device manufacturer Apple AAPL +0.6%, which company holds 12.4% of the smartphone market, has been notably coy about their cryptocurrency aims. Apple’s devices also have secure keystore vault, which is accessible through the company’s CryptoKit SDK. The Software Development Kit was released in the summer of last year but without the fanfare that similar developments by Samsung and HTC received.

Apple, it seems, seem to be prepared to support crypto, but have no appetite for making it the centerpiece of their brand in the way that Samsung and HTC appears to have done. Perhaps it’s because the company has been working on a geographic expansion into China which has adopted a hostile position towards cryptocurrency, in general. Alternatively, Apple, never one to be a follower, may be of the opinion that it is best to emphasize technology where it has demonstrated a first-mover advantage and play down where it is a fast follower on the heels of its competitors’ innovations.

Notwithstanding, the lack of appetite from Apple, SDF appears to be on a roll with its partnership with Samsung. The foundation, in fact, has had a busy year so far.

Earlier in the year, SDF announced that it had partnered with wallet provider Abra in a move which intends both to put the storage and trading of Stellar into the hands of retail users in developed countries as well as providing an alternative banking offering for those in disadvantaged countries that are subject to capital controls and high inflation who wish to work outside the traditional monetary system. Abra was in the news recently, for settling a case with the SEC and the Commodity Futures Trading commission concerning the illegal sale of security-based swaps to investors, which was a mechanism that the wallet provider briefly provided to U.S. users as a way of synthetically representing cryptocurrencies.