Torrent files have been a top choice of users across the internet to share files for almost two decades. This weekend, TorrentFreak reported that the world’s oldest active torrent file has just turned 15. The record holder file is a fan-made film based on The Matrix called The Fanimatrix .

A bunch of friends from New Zealand made this film in 2003 for just $800; they completed the project in nine days. Sebastian Kai Frost, the ‘IT-guy’ in the film project, said that they managed to bring down the movie’s file size to 150MB, but hosting was too expensive at that time. 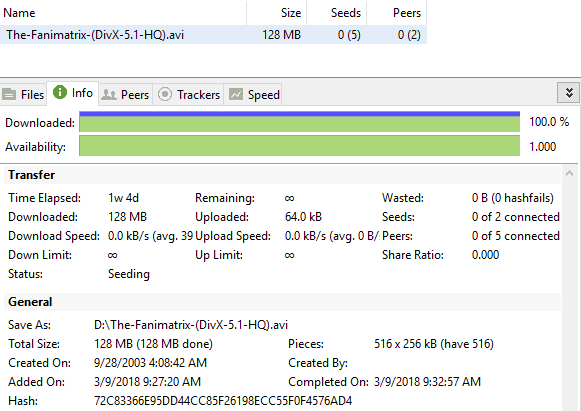 In New Zealand this would have resulted in a completely unaffordable amount of bandwidth to be used sharing the file via traditional HTTP or FTP methods. Especially given that the entire bandwidth in and out of the country at the time was less than a modern Wi-Fi link.

He later found out about BitTorrent and created a file to run a tracker on his Linux box. The torrent file was uploaded on September 28, and it was downloaded 70,000 times in just one week. The crew ended up saving $550,000 on hosting fees thanks to BitTorrent.

Frost aims to refresh the original Fanimatrix website to keep the torrent up and running well into the future.