Ethereum has seemingly hit a rough patch, having hit their lowest-ever block rewards and also having lead developer Afri Schoedon quit without explanation.

While the price of Ethereum (ETH) has been on a tear as of late, seeing a near 20% increase in price from $121 to $149 in the past 7 days, some troubling issues for the network and Ethereum Foundation have arisen as well.

First off, on February 17 the Ethereum network recorded its lowest daily block rewards since its launch in 2015. For the first time ever, the reward dropped to 12,989.34375 ETH as the total supply reached 104.93 million ETH. This drop has reflected on the hash rate, indicating there are fewer miners securing the network. 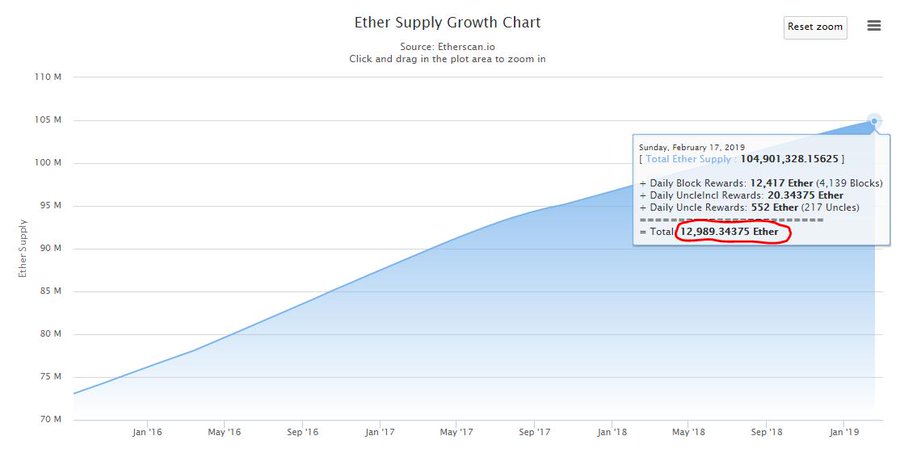 This is the chart that kind of started this whole rally.

New Ether coming online is less than 13,000 for the first time in history. Usually, it’s between 20k to 30k a day but has been declining lately due to the delay of #ConstantinopleHardFork.

The second piece of troubling news is the departure of Afri Schoedon, a core Ethereum developer who announced he will no longer be working on Ethereum on February 19. Schoedon’s sudden departure comes just 1 week before the scheduled Constantinople hard fork upgrade on February 28.

Upon his departure, the core ETH dev announced via Twitter that he will no longer coordinate hard forks, build testnets, or make any contribution to the Ethereum Foundation.

Schoedon worked on Ethereum since 2015 and is largely known for his work on the Parity Ethereum client. He was also a moderator on the Ethereum Reddit page and made large contributions to the network.

It remains unclear as to why Schoedon quit Ethereum, but it’s being debated among the community that he left due to persistent criticism on social media, or possibly to work for another project. While some people in the community are happy to see him leave, others believe he was a critical piece of Ethereum and will be missed.